Partners must change to stay in business 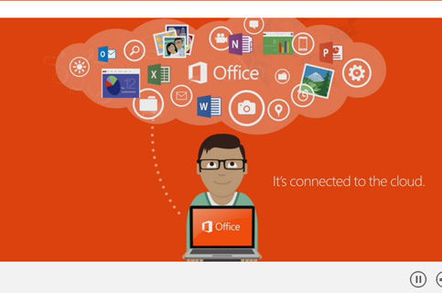 Office 365 is the “fastest growing business” in Microsoft’s history, the software giant has claimed.

Microsoft reckons it has seen a 150 per cent increase in the number of small- and medium-sized businesses (SMBs) adopting Office 365 in the last year.

Windows Azure, the company’s alternative to Amazon’s public cloud, now has 250,000 customers and is adding 1,000 a day, Microsoft claimed.

If this is accurate, it means Office 365 is moving faster than Microsoft hits like Office, Windows, SQL Server and even the latter big hitters of Xbox and Kinect.

The claims come courtesy of a cloud partner strategy senior director Josh Waldo in a blog here. It's part of an attempt to persuade partners it’s time to stop selling, integrating and reselling Microsoft products and start selling its online services instead.

There is, of course, no way to prove Waldo’s claims are correct or to determine their basis, but Microsoft has certainly been greasing the wheels on uptake of Office 365.

In 2013, Microsoft allowed enterprises to add office 365 subscriptions to their existing volume agreements. Under one campaign, Office 365 Add-ons, you could add Office 365 to an existing Enterprise Agreement at a sharp discount.

Signing up for Office 365 at any price, though, will have seen customers on EAs paying too much at any price.

That’s because those who’d attached an EA to their Office licences were entitled to get a new version of Office rather than starting to pay for Office 365.

Under an EA, you get upgrade rights to the subsequent version of your software during the lifetime of your agreement – and the run-time of the agreements starts at three years.

For example, somebody running Office 2010 with an EA agreement could have moved to Office 2013 without needing to pay extra for Office 365.

EAs are only for organisations with more than 250 PCs.

Every silver lining has a CLOUD...

The paper, Successful Cloud Partners and subtitled: What IT solution providers need to know to build high-performing cloud businesses does, however, warn of a cloud to the silver lining. That cloud: existing Microsoft partners must adapt and change their businesses.

In the online world, partners must themselves sell services while selling those of Microsoft, rather than continuing to sell physical hardware or copies of office and business software packages.

“It’s true that some activities will go away with cloud offerings. Resale could turn to referral, and a hardware sale may be replaced by Azure, or another cloud offering,” IDC wrote.

To make up, Microsoft and IDC said partners should look at business consulting, training and adoption or to target line-of-business buyers.

“With a subscription sale, it’s imperative to ensure that the customer is actually using the solution. While this can be additional effort, it can provide partners with a 'hall pass' with your customer, allowing you to forge a deeper relationship, and look for more business opportunities along the way,” IDC wrote. ®