Boffins hampered by the ampere hanker for a quantum answer 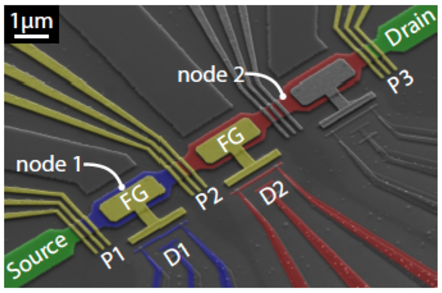 The search for a new ampere standard has moved a little further on, with a paper claiming that accurate quantum-level electron generation is feasible.

Hans Schumacher of the Federal Institute of Physical and Technical Affairs (PTB) in Braunschweig, Germany, and a group of collaborators, say they have been able to demonstrate “quantized-current generation with in-situ detection of tunnelling errors at low frequencies”.

If the experiment (posted to Arxiv, here) can be shown to be repeatable, and if the apparatus can be scaled up, the authors believe they have a mechanism by which the ampere can be redefined in terms of the charge on an electron.

As Nature explains, the ampere is a difficult unit to get a hold on: the current today's definition – “the amount of charge flowing per second through two infinitely long wires one metre apart, such that the wires attract each other with a force of 2 × 10−7 newtons per metre of length” – is “based on a thought experiment that can at best be approximated in the laboratory”.

A quantum-based standard would be preferable, but it's proved elusive because counting individual electrons is prone to error. As the authors note in their paper, “the reliability of any single-electron current sources generating a nominally quantised output current … is eventually limited by the stochastic nature of the underlying quantum mechanical tunnelling process.”

As Vulture South understands things, it's easy to fire billions of electrons – but that leaves the quantum-level measurement subject to statistical errors, something that quantum metrologists don't like. On the other hand, it's hard to scale up a mechanism that can reliably fire single electrons, so that you get enough for one ampere; and the paths single electrons will take are unpredictable, causing errors that have to be corrected.

Enter the PTB experiment. At the moment, it still suffers the limitations of low-frequency single-electron pumping, since it only delivered a few dozen electrons. The aim of this experiment was to improve the detection side: it's still subject to probabilistic errors, but the researchers say they have improved detection sensitivity by “more than an order of magnitude”.

The device they created is below. 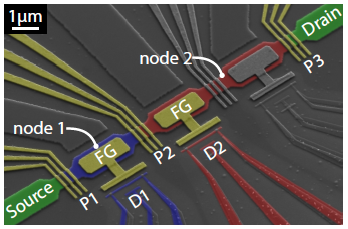 P1 – P3 are the three single electron pumps, separated by two charge nodes with metallic gates defining the quantum dots in the channel. D1 and D2 are the single-electron transistor detectors.

By providing the basis for an experiment that is scalable, the researchers hope to fulfil a key requirement of any SI standard – that it can be reproduced in any lab in the world, so that national test laboratories would end up with ammeters whose measurements agree. ®