Zapp! Yes, that's the sound of your cash disappearing 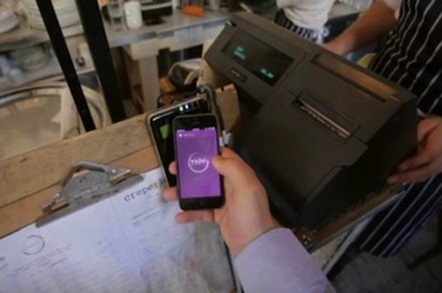 +Comment British banks HSBC, First Direct, Nationwide, Santander and Metro Bank have all signed up to Zapp's mobile payment system, allowing their customers to pay using a tablet or smartphone.

The five banking firms together provide services to around 18 million British account-holders - that's around 34 per cent of them.

Zapp is not a wallet. You don't have to pay money into the Zapp system. It's essentially an application which links your account with one of the aforementioned banks. Vocalink, Zapp's parent company, runs the UK national payments system, which explains how Zapp was able to sign up notoriously hard-to-pin-down banks.

The Zapp system will be rolled out through the banks' own apps. You won't have a Zapp app. So while HSBC owns Marks & Spencer Financial Services plc there isn't currently a Marks & Sparks phone banking app and Marks & Spencers customers are not immediately included in the project. What you will have is a pay-by-Zapp option, akin to PayPal, when you buy stuff.

The reliance on banks to produce the apps means that which phone platforms will be supported is again down to the individual banks. That means iOS and Android pretty much ubiquitously and an expectation that Windows Phone will start to appear as interest in BlackBerry wanes.

The service is designed to be used both online and in real shops. If you buy something with your mobile phone it will fire up Zapp from inside the payment process to make the transfer. If you are working on a PC, when you get to the checkout it will launch the app on your phone to verify payment - eliminating using the much disliked 3D secure system most web checkouts rely upon. If you're in a shop, you can pay using NFC, by scanning a QR code at the retailer or entering a PIN given by the retailer to confirm the transition. At home you can pay paper bills by scanning a QR code on the bill.

From the retailer's perspective the costs are more in line with a debit card than traditional mobile phone payments through operator billing or credit cards. This means there is a per-transaction cost - typically a retailer pays 20p per card - rather than a percentage cost. Zapp appreciates that this is prohibitive for low value transactions like buying a can of Coke or a music download and expects to have a separate micropayment tariff.

While the technology behind Zapp seems sound, the challenge as always will be in getting people to use it. The two things banks really hate are customers and cash.

The thought of someone walking into a branch to cash a cheque is most banks' worst nightmare. But then the feeling is mutual. Getting customers to do all the work on their mobile phones is obviously very much in the banks' favour. The problem is consumers like cash. Just think how much more special a £50 note feels than three £20 notes.

Zapp leaves this challenge to the banks. They won't get any help from the mobile industry. There is no revenue share so operators won't want to pre-install on the phones they sell and handset manufacturers won't install it if the operators don't want it.

Customers will want to see a real benefit, and remember it took credit cards the best part of 50 years to go from launch to mass market, and chip and pin took a good 10 years to get established. Meanwhile mobile payment solutions come and go daily... expect another one tomorrow. ®