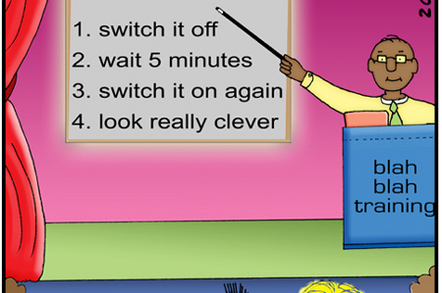 Cold call scams that attempt to hoodwink marks into paying for useless remote diagnostic and cleanup services have been a popular scam for years. Victims are often encouraged to sign up to multi-year support contracts costing hundreds of dollars for unnecessary and worthless services.

Enforcement action by groups such as the US Federal Trade Commission have only served to slow down the rate of growth of such scams, which are beginning to diversify.

Anti-virus firm Malwarebytes documented a case where a company called Speak Support was offering similar "services" to Mac fans back in October.

As before, the short con relies on social engineering techniques to create the perception of severe (in reality, imaginary) problems in urgent need of fixing. Victims are roped in using either cold calling or online advertising.

The "support technicians" who answered the phone when Segura called one of these numbers informed him they weren't able to directly connect to his smartphone, instructing him to plug it into his computer before asking him to download remote login software (specifically LogMeIn).

At this point a genuine technician might be expected to run some sort of a scan or diagnostic on a connected phone. What actually happened was that after browsing the phone’s internal storage and checking its properties they asserted that there was some sort of infection on the device, and that pop-up permission screens for Adobe Flash or similar were evidence of this.

The technician went on to claim that a file – rundll32.exe, a standard Windows executable – was installed on the Android device as well as the PC and is a "very bad file". The scammer then proceeded with an attempt to hoodwink Segura by using a Windows feature designed to allow users to restore files from trash in an attempt to falsely portray his system as riddled with malware.

"Windows prefetch files are often used by scammers to make up non-existing threats," Segura explained. "In this case the technician removed all the ‘infected files’ and simulated a ‘re-infection’ by quickly restoring them from the Recycle Bin (Ctrl+Z trick)."

Many people who aren’t too tech-savvy are likely to take the whole performance at face value before ultimately "paying several hundred dollars for dubious services from rogue technical support companies," Segura concludes.

In the example caught by Segura, the dodgy support organisation ultimately tried to land him with a $299 bill for one year of so-called support. And the problem doesn't even stop at the rip off fee. "Keep in mind that those miscreants have direct access to your computer and data – with all the risks that this entails," Segura warns.

Segura recorded a video of the Android support scan in progress which can be found below.

Video of the security scan in progress

Fraudsters behind the same are showing a willingness to speculate in order to accumulate.

"While paying for ads requires a certain budget, ads have the advantage of funnelling higher quality prospects because people are actually already experiencing an issue," Segura explains on a blog post by Malwarebytes explaining how tech support scams have gone mobile. "In contrast, cold-calling is a very wasteful approach (low ratio of interested people for the number of outgoing calls) and not to mention that in many countries cold-calling is completely illegal."

Ridding the web of such scams is likely to prove akin to playing a game of Whack-A-Mole. The dodgy firms behind the ruse have prepared themselves to remain in operation even if the main outlets get suspended as a result of complaints.

"Very often, the same company will register different domain names with different phone numbers while in reality they all belong to the same group," Segura explains. "This technique allows them to create multiple identities which they can cycle through in case of abuse/complaint reports."

"Such sites can easily be spotted because the content is almost identical (copy/paste) and some of the graphics are the same," he added.

The progress of the tech support scam from Windows to Mac to tablet and smartphone reflects the changing way people access the internet.

"The tech support scam lives on by adapting to its environment and exploiting the never failing human factor," Segura concludes. "I can imagine that in a near future those fake support companies will remotely access the phone or tablet directly because more and more people no longer own a ‘traditional’ computer."