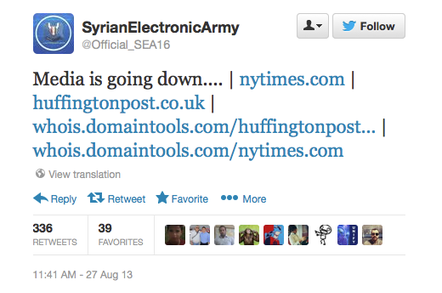 The notorious hacktivists of the Syrian Electronic Army have received an unwelcome dose of their own medicine, after their official website was defaced by a Turkish hacking crew.

The SEA is notorious for a long run of attacks, the most high profile of which have involved taking over the blogs and social media profiles of media organisations (AP, National Public Radio, Al Jazeera, The Daily Telegraph, The Washington Post, The Onion etc.) as well more recent high profile attacks along the same lines against Microsoft and Skype over recent days.

The SEA's normal modus operandi for hijacking accounts involves multi-stage phishing attacks. At first they aim to trick workers within a targeted organisation into handing over their email passwords before targeting those in charge of maintaining social media accounts with secondary attacks that take advantage of already compromised internal email accounts.

The SEA has also turned its hand to website defacement and hacking since 2011, when it first came to widespread notice.

TurkGuvenligi sprayed digital graffiti on the SEA's homepage which chastised the Syrian Electronic Army (extract below) for their activities.

You imbecils [sic] will attack our country with fake phishing emails and we’ll accept your lies and dont [sic] do anything? That is the end you deserve

The SEA’s website remains offline at the time of writing on Wednesday afternoon. A screencap of the defacement, along with related commentary, can be found in a blog post by veteran security industry expert Graham Cluley here.

TurkGuvenligi has form for these sort of shenanigans. In late December the Turks defaced the official OpenSSL website, leaving a message which read "TurkGuvenligiTurkSec Was Here @turkguvenligi + we love openssl". OpenSSL blamed the defacement on “insecure passwords at the hosting provider”.

"The source repositories were audited and they were not affected," OpenSSL reassured users in a statement issued in the immediate aftermath of the defacement.

"Other than the modification to the index.html page no changes to the website were made. No vulnerability in the OS or OpenSSL applications was used to perform this defacement. Steps have been taken to protect against this means of attack in future." ®

Modern Warfare 3 flogged on eBay for a grand

Get rich and try dying