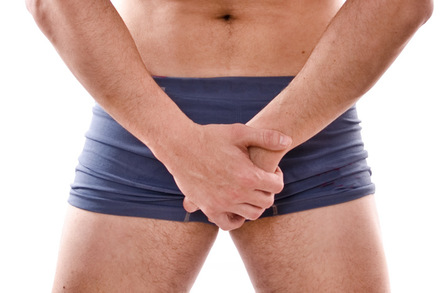 An Irish competitive mountain biker required delicate surgical intervention after his wedding tackle came off the worse for wear after a collision with his bike, resulting in a seven-week erection.

According to the Irish Medical Journal, the unnamed 22-year-old hobbled up to Dublin's Tallaght Hospital "with a five week history of ongoing priapism after he had sustained a blow to perineum when he fell on to the crossbar of his mountain bike".

While initial "pain, swelling and bruising" had subsided within days of the tumble and there were no signs of injury, the poor bloke was still suffering "a rigid erection".

Doctors first opted for a hands-on approach, trying "manual compression". This "caused resolution of erection but the penis rapidly refilled with blood to full tumescence".

The Irish Independent explains, in layman's terms, that the "minimally invasive" procedure "involved inserting gel foam and four tiny platinum coils at an abnormal connection between an artery and a vein that supplied blood to the man's penis".

A month later, "there was no recurrence of priapism and patient reported satisfactory erection and intercourse".

Tallaght Hospital's consultant intervention radiologist, Dr Ronan Browne, described the loss of permawood as "a great result". He added: "We were very happy with the outcome. It was an anxious time for the patient as it would be for any young man."

The IMJ notes that there are only two previous records in medical literature of "priapism following cross bar straddle injury". In this case, it was painless "high-flow" priapism, as opposed to the agonising low-flow flavour.

The journal clarifies that priapism is "a prolonged unwanted erection for more than four hours in the absence of sexual stimulation". It adds: "The commonest low-flow variety is due to veno-occlusion, there is painful rigid erection with severely restricted cavernosal blood flow. This warrants emergency intervention with penile drainage to prevent permanent damage.

"In high-flow priapism, usually caused by trauma and considerably less common, there is unregulated arterial blood flow commonly due to traumatic fistula into the corpus cavernosum." ®

IT Crowd jokes aside, who okayed this mess?