DOOMSDAY still just MINUTES AWAY: As it has been since 1947 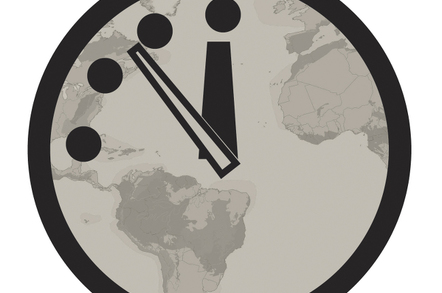 Top boffins have refused to shift the quivering minute hand of technological Armageddon from its position at five minutes to midnight on the Doomsday Clock.

The iconic indicator of impending doom, which was created by the Bulletin of the Atomic Scientists in the wake of the WWII Manhattan Project, measures humanity's proximity to self-inflicted disaster using the clock, with midnight indicating apocalypse.

Last year, the Bulletin's Science and Security Board and its Board of Sponsors, which is thronged with Nobel laureates, moved the harbinger an extra minute closer to midnight and this year's group of luminaries has refused to let up.

The Bulletin said that although the world was making continuing strides towards nuclear peace - such as the interim agreement between the United Nations Security Council, Germany and Iran on a joint plan of action to solve international concern about the latter country's nuclear programme and ongoing reductions in weapon stock - humanity is still perilously close to catastrophe.

Overall, however, in 2013 the international community dealt with the continuing, potentially civilisation-ending threat of nuclear weapons in a business-as-usual manner, meaning that outsized nuclear arsenals remain in the United States and Russia, and the nuclear arsenals of some countries — notably India, Pakistan, and China — "appear to be growing," the group said.

"The interim Iranian deal notwithstanding, the international community has not come to grips with an unfortunate reality: The spread of civilian nuclear power around the world — which continues apace, despite the disaster at Fukushima — also spreads the potential for new nuclear weapons states."

On top of nuclear concerns, the Bulletin also cited worries about "climate inaction" and the emergence of new technological threats like cyber weapons and killer robots, also known as autonomous drones. The group called on the UN and the Security Council to work on a laundry list of issues, including nuclear weapons and power, climate change and emerging technologies.

"In the face of the continuing perils posed by nuclear weapons and greenhouse gases, as well as the potential threats from a variety of emerging technologies, particularly in the biological and cyber realms, we call on you and other leaders in the international community to create new and just ways to manage powerful and dangerous technologies, so as to enhance prosperity and peace," the Bulletin said. ®

Doomsday Clock moves to 150 seconds before midnight. Thanks, Trump

Closest setting to doom since the heady days of 1953