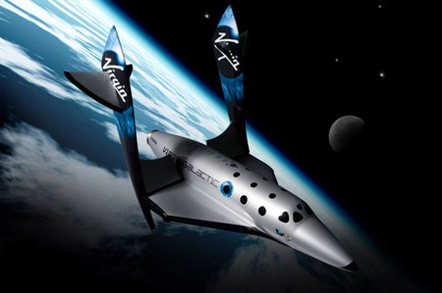 The "feather mechanism" to which Whitesides refers is SpaceShipTwo's unique reentry system, in which the twin tails of the craft tilt upward by 65 degrees to allow a stable, hands-free descent that doesn't generate excessive heat from friction.

Also tested during Friday's flight were the vehicle's Reaction Control System (RCS), which will eventually allow its pilots to maneuver it in space, and a newly installed reflective thermal coating on the craft's tail booms.

"She flew brilliantly," said Virgin Galactic Chief Pilot Dave Mackay, who completed the test flight along with Scaled Composites Test Pilot Mark Stucky. "All the tests went really well and generated vital data that will be used to further fine-tune our operations."

Although this was the craft's highest flight to date, however, it still has a long way to go before it reaches its goal of true space flight. By US Air Force standards, "space" begins at a height of 264,000 feet (80,467m) above the Earth's surface, nearly four times higher than SpaceShipTwo's new top altitude.

To hear Virgin Galactic founder Richard Branson tell it, however, from here on the SpaceShipTwo team will make progress by leaps and bounds.

"I couldn't be happier to start the New Year with all the pieces visibly in place for the start of full space flights," the beardy billionaire said. "2014 will be the year when we will finally put our beautiful spaceship in her natural environment of space." ®