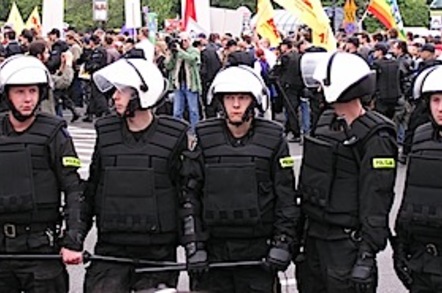 Samsung's new cellphone factory in Thai Nguyen province, Vietnam, is off to an inauspicious start, having experienced its first work-related riots before it has even opened for business.

According to a report in the state-run newspaper Thanh Nien, construction workers clashed with security guards at the facility on Thursday when the guards reportedly wouldn't allow some of the workers to bring meals to the site.

Another source claimed the guards told workers who had forgotten their ID cards to retrieve them from their homes, which in some cases were located far away from the construction site.

As tempers flared, a guard allegedly hit one worker with a club, knocking the builder unconscious and kicking off a melee that, we're told, lasted as long as three hours.

Workers reportedly beat and threw rocks at the security guards, and when police arrived to break up the scrum, they too were attacked. "Hundreds" of workers are said to have been involved in the violence.

In all, between 11 and 13 people were injured in the incident – including guards, workers, and cops alike – with five of them described as having suffered serious injuries, including "brain trauma." A Chinese news source even reported that one of the most seriously hurt had died, but this could not be confirmed.

Workers also reportedly set fire to three containers that were being used as housing by the security forces and burned as many as 22 of the guards' motorcycles. Videos posted by Thanh Nien showed plumes of black smoke rising from piles of burning debris.

Samsung broke ground on the factory site – its second in Vietnam – in March 2013, and the South Korean firm is expected to spend about $3.2bn to complete the construction. By the time the Thai Nguyen plant opens for business in March 2014, it is expected to be the largest Samsung mobile device factory in the world.

Samsung and other tech companies have lately been moving some of their operations to Vietnam because labor costs there are much lower than in nearby China. Clashes like the incident at Samsung's factory site are also rare in Vietnam, where the authoritarian government takes a dim view of violent labor disputes.

In a canned statement, Samsung said Thursday's incident was "a brief altercation" over "security protocols," and that construction work on the factory was not affected.

Vietnamese police say they are investigating the matter, and that anyone believed to have been involved will be subject to prosecution for "vandalism" and "disturbing public order." ®