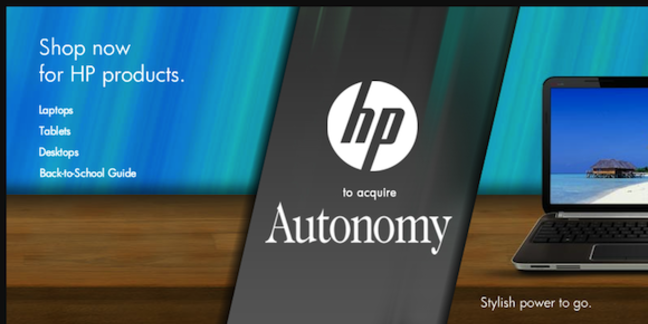 An investigation by the US Air Force into alleged accounting irregularities at Micro Technologies has unexpectedly dragged all that nasty business between HP and Autonomy back into the limelight.

The USAF has been looking into MicroTech, which does a lot of business with government agencies – and, crucially, resells Autonomy software, meaning its own fortunes were closely linked to Autonomy's, in its pre-HP-acquisition days – and it appears to have uncovered suspicious transactions between the firms, the Washington Post reported.

Its investigation has led to allegations against Autonomy that are very similar to those HP made against the firm, after it wrote off $8.8bn on its $11bn acquisition of the company.

A letter from the USAF outlining the allegations, which has been published online by Recode, proposes that MicroTech and a number of former Autonomy execs be debarred from federal government contracts.

The USAF made a number of claims, including that the British company faked software licence transactions with resellers to inflate its revenues.

The letter describes how Autonomy would recognise revenue on its books that it would then refund in some fashion to resellers, or recognise revenue from end-user licences on deals that hadn't yet closed – or even revenue on deals that never closed. In one case, Autonomy was trying to seal a ten-year deal with an unnamed agency worth $106m. Apparently, as part of the deal, MicroTech agreed to sell $11m of Autonomy software to the agency, which Autonomy put on its balance sheets. Yet, according to the USAF, MicroTech didn't have any role in the negotiations with the unnamed agency and didn't pay Autonomy anything – until seven months later, when it only stumped up $500,000 for the licences.

When the company was challenged by an auditor about the supposedly outstanding $10.5m, Autonomy paid MicroTech $9.6m for an "Advanced Technology Innovation Center". MicroTech promptly transferred $9.6m back to Autonomy to pay various outstanding bills with the firm – including the one for the $106m unnamed agency transaction. To add insult to injury, that agency ended up awarding the contract to another vendor entirely.

The Air Force also claims that despite the fact that Autonomy is a software company, in the two years before it was bought by HP the firm was taking in revenue on the resale of low-margin hardware products. It accuses execs, including former Autonomy chief Mike Lynch, of using the hardware sales to plug end-of-quarter revenue gaps.

On a website dedicated to answering Autonomy critics, Lynch said that the firm and the named execs "vehemently deny anything improper".

He claimed that the USAF letter, like HP's allegations, show a "fundamental misunderstanding of IFRS accounting practices". Lynch is referring to the International Financial Reporting Standards, which Autonomy, as a British company, adheres to, as opposed to the Generally Accepted Accounting Principles (GAAP) followed by US companies. The former Autonomy boss has said in the past that the differences in the systems account for the discrepancies HP is complaining about.

"Autonomy was fully transparent with its auditors and correctly represented its accounts. Autonomy’s transactions were entirely properly accounted for under IFRS and reviewed by Autonomy’s auditors as appropriate," he said.

"Moreover, in relation to the scale of the $5bn writedown taken by HP on the basis of these allegations, the deals cited in the USAF letter constitute a tiny number of deals of low materiality in the context of Autonomy’s size. Even if these deals had in some way been questionable, they would have had no effect to justify the writedown."

Lynch said that Autonomy had responded to the USAF, but its correspondence was private. He claimed that HP still hadn't given him any detailed allegations about Autonomy, just "unsupported accusations, leaks and PR spin".

Responding to the USAF letter and Lynch's defence, HP reiterated in a statement carried by Recode that the writedown was due to "pre-acquisition accounting improprieties, disclosure failure and misrepresentations by former Autonomy senior management".

"It is patently ridiculous to continue to claim that these very serious allegations, currently the subject of investigation by both the US Department of Justice and the UK's Serious Fraud Office, are merely the result of a 'misunderstanding' in the difference between US GAAP and IFRS accounting rules," the company said.

The whole debacle is currently being investigated by the UK's Serious Fraud Office, the US Department of Justice and the SEC. ®