T-Mobile US: AT&T's mobe buyout deal is so 'desperate', we'll do it too 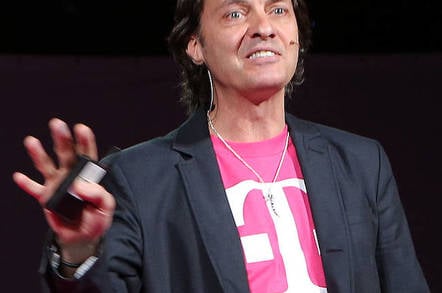 CES 2014 T-Mobile US says it will buy rival carriers' customers out of their phone contracts if they switch to the pink-themed T-Mob.

The firm on Wednesday announced that it would offer packages worth up to $650 to customers in America who ditch their mobile plans with AT&T, Verizon or Sprint and sign on with T-Mobile US.

Under the plan, folks will receive up to $300 in a one-time payment for trading in their old handsets for a T-Mobile US supported model. Additionally, the company will hand over up to $350 to cover users' termination fees when they cancel their previous contracts.

Heralded as the newest phase of the network's Un-carrier plan, the payment system is being touted as an option for getting out of restrictive annual contracts and family service plan packages.

"Carriers have counted on staggered contract end dates and hefty early termination fees to keep people bound to them forever. But now families can switch to T-Mobile without paying a single red cent to leave them behind."

Speaking at the CES 2014 conference in Las Vegas today, CEO John Legere continued to snipe at rival AT&T – which last week beat the T-mob to the punch by unveiling a similar buyout scheme in the US that offered users as much as $450 when they jump ship from T-Mobile US to AT&T.

Legere slammed AT&T's promo as "desperate" at the time it was announced, and has since made an art out of trolling the company in his public appearances. Earlier this week the T-Mobile US boss stole the spotlight at AT&T's CES kickoff party when he attended, and was apparently subsequently removed from, the event as a guest of headlining rapper Macklemore.

Poking fun at the incident during T-Mobile US's announcement, Legere held up a t-shirt printed with his image and the caption "I just wanted to hear Macklemore."

Meanwhile, T-Mobile US said its Un-carrier campaign has brought in 1.645 million new customers over the last quarter. The company reports that it now has 46.7 million customers on its prepaid and postpaid plans.

"Over the past 12 months, 4.4 million customers have come to T-Mobile in response to greater flexibility and choice," Legere said.

"We have clearly struck a chord with customers and will continue to look for ways to expand on that in 2014." ®