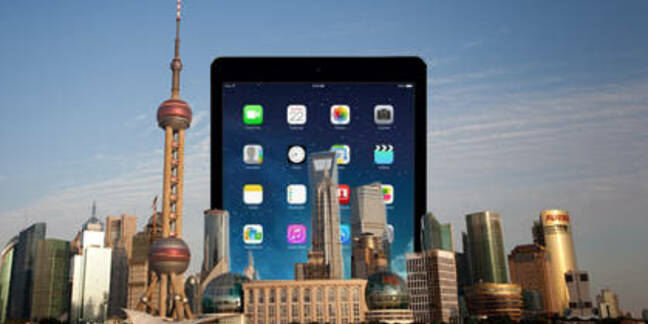 Apple has taken the unprecedented step of touting its wares on a third party e-commerce platform in a bid to step up sales in China, with the launch of a TMall storefront.

A spokesperson for parent company Alibaba confirmed to The Reg that the Apple Store at apple.tmall.com is an official Cupertino venture.

The news comes on the back of Apple’s recent, long-awaited tie-up with carrier giant China Mobile which will see its iPhones go on sale to a huge subscriber base from January 17.

However, TMall is a new channel for the fruit-themed US giant.

Hitherto it has relied on a tightly controlled combination of its own bricks and mortar and online retail stores and carrier and reseller partners in order to get its wares into the hands of fanbois.

The move is yet another sign of the growing importance Cupertino is placing on the Greater China market.

The most recent stats (Q3 2013) from analyst Canalys show just how far Apple is off the pace, albeit with things looking up in the Middle Kingdom.

“Apple moved back into the top five this quarter, ahead of Xiaomi and ZTE, which shows the success of its strategy to finally prioritise China as one of the initial launch countries for its new products.”

Unlike its unruly C2C sibling, Taobao Marketplace, Tmall is a Chinese language B2C web site through which primarily big name brands can sell their wares.

Apple will join over 50,000 other merchants on the site and be hoping to tap hundreds of millions of registered users.

On the 11/11 shopping day in China last year TMall and Taobao Marketplace took a combined 35 billion yuan (£3.5bn) through the Alipay payment platform, according to Alibaba.

As if that wasn't enough, Apple is also prepping a "Red Friday" one-day sales event in selected Asian markets this Friday (h/t WSJ) ahead of the Lunar New Year at the end of the month. ®

But company reckons things are just getting started in China

Alright! Ma time to meet that shag quota! Alibaba chairman steps down at 55 with $38.6bn fortune

All work and no play makes Jack a dull boy