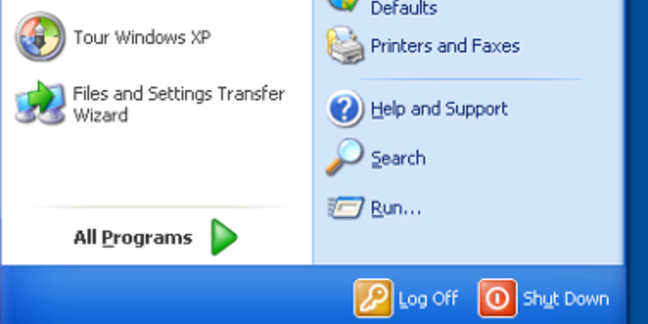 Less than one-third of PCs are now running Windows XP, with many a Microsoft shop giving up on the popular 12-year-old operating system in time for New Year.

Windows XP’s market share fell to 28.98 per cent in the month of December, from November’s 31.22 per cent, according to the latest stats from NetApplications.

It wasn’t Windows XP’s biggest monthly fall – that was between July and August 2013 – but December 2013 was one of the biggest based on NetApplications’ data.

The fall came as XP fans faced their final four months of extended support for the OS, which was first released in the second half of 2001.

Microsoft will no longer make security patches for Windows XP after 8 April this year.

Windows 7, meanwhile, Microsoft's 2009 OS, seems to be consolidating its hold. Windows most popular operating system was more or less steady throughout 2013 and only received a minor fillip – of 0.88 per cent, taking it up to 47.52 per cent from 46.64 per cent – when Windows XP posted its big drop.

That means while Windows 7 has benefited from XP’s decline, it has not been a straight swap from Windows XP to the newer operating system.

With PC sales falling and consumers sucking up tablets, the biggest driver for Windows 7 is businesses moving off Windows XP to beat the April deadline.

The question is, where are those other PC users going?

The answer would seem to be a small number are going to Windows 8/8.1.

Windows 8.1, pitched by Microsoft on its Surface slabs and tablets and PCs from OEM partners, increased its market share by one percentage point in December.

NetApplications said Windows 8.1 hit 3.6 per cent compared to 2.64 for November. Predecessor Windows 8 also increased – hitting 9.4 per cent in December versus 9.26 for the month before.

As far as shipments of actual units that run Windows 8/8.1, it is still too close to Christmas to say just how Microsoft and its OEM partners have fared.

Analyst Canalys, though, predicted it’ll be Microsoft rather than Acer – Lenovo, Hewlett-Packard or Samsung – which will continue to lead the pack with the single largest market share over Christmas. Already, 30 per cent of Windows tablets sold in Q3 2013 were Surfaces, giving Microsoft a total tablet market share of four per cent.

Canalys analyst Rachel Lashford told The Reg the expectation is that for this year Microsoft will manage to carve out a total five per cent of the tablet market.

Android and Apple will continue to lead, with 65 and 31 per cent respectively, she said – noting these numbers will be down from last year in the face of growing competition. ®