Fiery death by cosmic radiation? But but but THINK OF THE RATINGS! 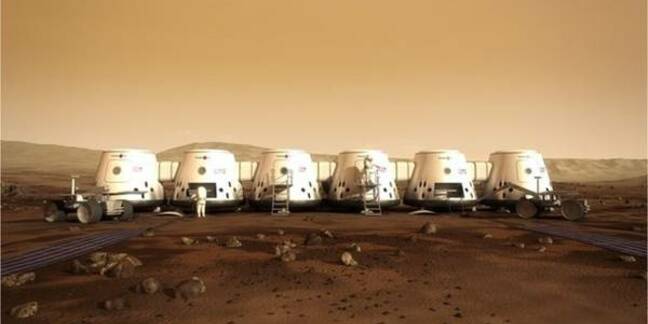 The Mars One project has whittled its 200,000 video applicants down to just 1,058, who will compete for a place on the entirely hypothetical one-way trip to the Red Planet to establish a human colony.

The chosen few will be taking part in a reality-TV style competition to cut them down to the final 40 candidates hoping to be the first immigrant Martians. The fun won't stop there, though: the new citizens of Mars will also have their every move (including their, unfortunately, rather likely deaths) televised during the trip.

The telly rights to the invasive Martian experiment are what the non-profit organisation is hoping will pay for the whole thing, which it reckons will cost around $4bn.

That figure is more than just a little theoretical, considering the fact that no-one knows how to get people to Mars without killing them long before they get there. No spacecraft currently exists that could do the job and many of the technologies needed, like a way to sufficiently block space radiation, haven't been invented yet. (Oh, and the foundation hasn't managed to secure any deal on the television rights so far)

Undeterred by these minor details, Mars One co-founder Bas Lansdorp said the project was excited with its "first tangible glimpse" of what the Martian colony could look like.

“We’re extremely appreciative and impressed with the sheer number of people who submitted their applications," he said. "However, the challenge with 200,000 applicants is separating those who we feel are physically and mentally adept to become human ambassadors on Mars from those who are obviously taking the mission much less seriously.

"We even had a couple of applicants submit their videos in the nude!”

The next stages in the selection process will include rigorous simulations and physical and emotional testing of the candidates, according to Norbert Kraft, chief medical officer at the foundation. Although, no-one's sure yet exactly what the applicants will go through until the TV rights have been settled.

In the mean time, Mars One will be focusing on its first mission, expected in 2018, when a Lockheed Martin-built unmanned lander and a Surrey Satellite Technology comms sat will set off for the Red Planet.

Since these are the first actual space technology firms to be associated with the venture, El Reg has reached out to Lockheed to see what it reckons it will take to get Mars One people off the ground. We'll let you know when we do... ®