@Shark: Humans are so bad at statistics I think I'll eat one 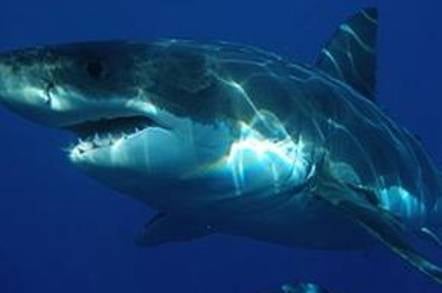 The Australian State of Western Australia (WA) has signed over 300 sharks up to Twitter.

The program sees sharks tagged with gadgets that, when they come close to floating monitors located near popular beaches, detect the beasts' presence.

When a tracker-equipped shark does so, alerts about its location are piped into the Surf Life Saving WA Twitter feed, which emits warnings like this one below:

Tweeting shark locations is seen as a good thing because Australia experiences a few shark attacks each year – 14 in 2012 according to this count. This data compiled by Sydney's Taronga Zoo suggests an Australian “... has a 1 in 3,362 chance of drowning at the beach and a 1 in 292,525 chance of being killed by a shark in one's entire lifetime.”

Some back of the envelope maths rams home the point that shark attacks are very, very, rare. Australia is home to 23 million residents and hosts around 10 million visitors each year. If we make a very meek assumption that one in ten of those people – just 3.3 million – swim in the sea just once each year, it's clear that one's chances of ending up in a shark's jaws are tiny. As a counterpoint consider that “There are an average of 121 deaths per year from people drowning at Australian beaches, harbours and rivers each year,” according to the Taronga analysis, and the fact that 1,193 people died on Australia's roads in 2013.

But as shark attacks loom large in the public imagination, local authorities often feel the need to Do Something About Them. In Sydney, that urge resulted in a program that flew shark-spotting helicopters up and down the city's coasts. It later transpired the program spotted only one shark for each 100km spent aloft and in some cases failed to spot sharks that attacked bathers minutes after it flew away.

Tweeting the presence sharks may have little chance of reducing the number of attacks but is at least a more targeted response. It is also more humane than a recent program of culling sharks sighted near beaches. ®

Bootnote: Your correspondent, for what it is worth, regularly swims and snorkels in Australian waters and has seen “gummy sharks”, aka Wobbegongs, and sting rays a-plenty in popular snorkelling spots frequented by families. I once saw something oddly large, dark and rapid from the corner of my mask in Sydney Harbour and got back to the beach as fast as possible. I suspect it was a seal but didn't stick around to validate that judgement.