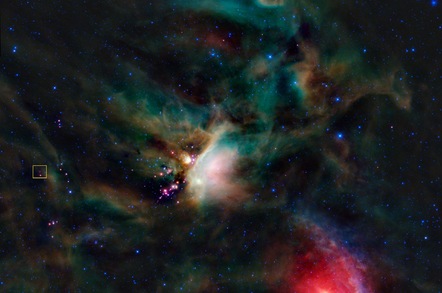 In early December, astroboffins got all excited when they spotted a 'new' nova visible with the naked eye.

Nova Centauri 2013, as it was called, was only visible to folks in the southern hemisphere, but was bright enough that handheld cameras were able to spot the star.

As expected, the star became progressively brighter, then waned, which is just the sort of thing one would expect of a colossal stellar explosion.

But the star has since done some odd things, unexpectedly becoming becoming brighter, then dimmer, and now turning bright pink.

The latest transformation was spotted by Kiwi astrophotographer Rolf Wahl Olsen, who says the star's colour is likely caused by “ionized hydrogen which emits strongly in both the red and blue part of the optical spectrum”.

Olsen has released an image of the star blushing to a few science websites who have Tweeted it, as seen below.

Nova Centauri 2013 has calmed down a bit in recent days, with this chart showing it is now dimming rather rapidly.

If you're at about 38° S or even closer to the South Pole, you have a chance to see it near the Southern Cross before dawn. ®