Firm's Mr Fixit says it's 'well-positioned for the future' 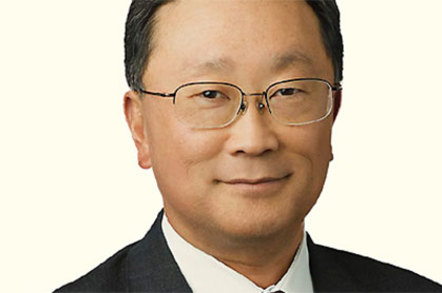 Interim BlackBerry CEO John Chen says critics should quit dwelling on the snakebit smartphone vendor's past missteps and look instead to what the company plans to do tomorrow.

In an editorial published by CNBC on Monday, Chen said that he has crafted a new strategy for the Canadian firm that leaves it "well-positioned for the future," adding that it has taken him less than two months to do so.

"This isn't the first time I've held the reins at a tech company facing challenging circumstances," Chen wrote – a reference to his time as CEO of Sybase, which he returned to profitability after a sharp downturn in the late 1990s.

Chen praised BlackBerry's top management as "a talented team of industry leaders," sidestepping the fact that he axed several of the company's execs shortly after his appointment, eliminating some executive positions in the process.

"With a global enterprise customer base exceeding 80,000, we have three times the number of customers compared to Good, AirWatch and MobileIron combined," he wrote.

He also noted that BlackBerry is the only such vendor to receive the US Department of Defense's coveted Authority to Operate (ATO) certification, and that its tech is the favorite of security-conscious governments around the globe.

On the Messaging front, Chen said BlackBerry Messenger (BBM) is a hit with smartphone users everywhere, even though the company doesn't yet make any money from it. More than 40 million Android and iOS users have installed the service since BlackBerry opened it up to outside platforms in October, he said, and he hopes to turn that base into a revenue stream "in the coming years."

As for Embedded, "QNX has always been one of our most exciting technologies," Chen wrote – and by "always," we assume he means ever since 2010, the year BlackBerry acquired the company that invented it.

Although much of the focus of late has been on how QNX underlies the BlackBerry 10 smartphone platform, the original real-time OS continues to sell well for machine-to-machine applications, Chen said, and BlackBerry plans to unveil "new capabilities and cloud services" at the Consumer Electronics Show (CES) in January.

That leaves what is perhaps BlackBerry's most contentious business division, the Devices unit. Several analysts have urged the Canadian firm to ditch its smartphone business altogether in the wake of disastrous writedowns on unsold inventory of its latest models, but Chen has been steadfast in pooh-poohing that idea.

In his Monday missive, Chen said BlackBerry has streamlined its devices business model – it has reportedly ditched some planned consumer models in favor of focusing on the enterprise market – and that the five-year manufacturing partnership it has signed with Foxconn will help keep costs down and reduce time-to-market for new products.

"With a partner dedicated to our hardware, BlackBerry can focus on what we do best – iconic design, world-class security, software development and enterprise-mobility management," Chen wrote.

The proof, of course, will be in the pudding. During BlackBerry's most recent earnings call with financial analysts on December 20, Chen said he expected the company's first product to be produced by Foxconn to debut in the Indonesian market in March or April of 2014. ®