Who's the best-built bot that makes the US military hot? SCHAFT! 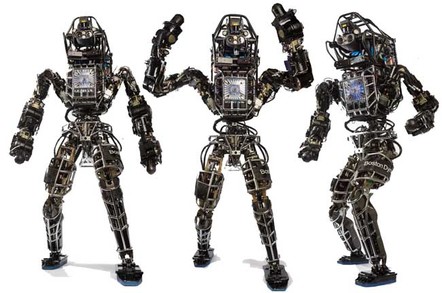 Video A Japanese robotics company now owned by Google has won the first stage of the DARPA Robotics Challenge, which is trying to find a new generation of mechanoids to keep fleshy humans safe from harm.

The first of the challenge trials were held in Florida over the weekend and saw humanoid robots attempt eight tasks: driving a vehicle past obstacles, walking over rubble, climbing a ladder, clearing debris, opening a door, cutting through a wall, opening and closing a valve and killing Sarah Conner operating a fire hose.

The winning robot, a custom-built machine dubbed SCHAFT, came from the Japanese robotics firm of the same name which was recently bought by Google as part of its ten-year plan to mechanize the home and workplace. SCHAFT won four categories (crossing rubble, climbing ladders, clearing debris and using a hose) and scored well in other categories.

The second-placed system came from the Florida Institute for Human and Machine Cognition (IHMC), which used one of the more generic ATLAS robots developed for the competition by Boston Dynamics (now also owned by Google). Carnegie Mellon University's Team Tartan Rescue was third with its four-handed CMU Highly Intelligent Mobile Platform (CHIMP) design.

There was bad news in the competition for NASA, however. Its Valkyrie robot, custom designed with a glowing Iron Man-style chest piece and a pair of pseudo-breasts, scored no points, along with two other teams.

Before you start having nightmares about humanoid robots waging war against the mankind, the challenges showed that there's still a long way to go. The robots were typically tethered to a power supply and moved with glacial speed, often taking over a minute to decide on an action.

"The robots we see today are the robots of science fact, not science fiction," said Gill Pratt, the DARPA program manager for the competition. "They'll be slow, and they will often fail. But we hope today's modest progress will be a good next step to help save mankind from disasters."

The Robotics Challenge finals will be held this time next year, at which point DARPA is looking for a better performance and faster response times. The winning team will get a $2m prize (and presumably some lucrative job offers), with the runners-up receiving $1m and $750,000 for second and third respectively. ®