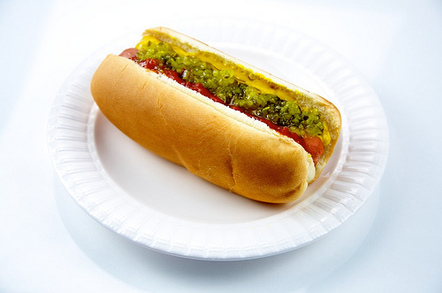 The Mail Online has pulled its recipes website after it was vandalised by Libyan cyber-hijackers.

The compromised site might easily have been used as a platform to serve up malicious code but it appears the hackers involved confined themselves to bragging about their conquest. The defacement message omits any political message and is characterised by a screen-cap of the benign Professor Dumbledore from the Harry Potter movies with the caption "I own this shit". The Great Team are a prolific defacement crew who have claimed the scalps of more than 2,100 websites over the last two years.

The MailOnline responded by updating the DNS so that recipes.dailymail.co.uk pointed to its own server rather than that of MyDish, through use of a server that handles redirects. The papers also removed the link to the recipe subdomain from its Health news tab - it was there earlier in December, but has since vanished. The recipe site had been previously advertised as “powered by MyDish”.

El Reg was unable to find any evidence of the other subdomains being attacked. It appears that the compromise was restricted to recipes.dailymail.co.uk.

At the time of the hack, recipes.dailymail.co.uk resolved to the IP address 78.143.240.61, which is owned by web-hosting company Dark Group (dg.co.uk) and is also the same IP used to serve mydish.co.uk.

The site was run from IIS 6.0 web server software from servers running Windows 2003, according to Zone-h.

We invited both MyDish and the Daily Mail Group to comment on the security snafu on Friday morning but are yet to hear back from either party.

This isn’t the first time recipes.dailymail.co.uk has been hacked. Last year, when it appears to have been a MyDish site served from Dark Group, it was defaced by the notorious Team Poison crew with a more political message (recorded by Zone-h here) criticising the Mail's stance on issues such as immigration. ®

Thanks to Reg reader Wyn for the tip.

We did hear back from Dark Group, however, who had this to say:

Dark Group provides this client with unmanaged dedicated and virtual servers, where we just look after the hardware, power and network. Our client has their own in-house technical team who manage the operating system and software.