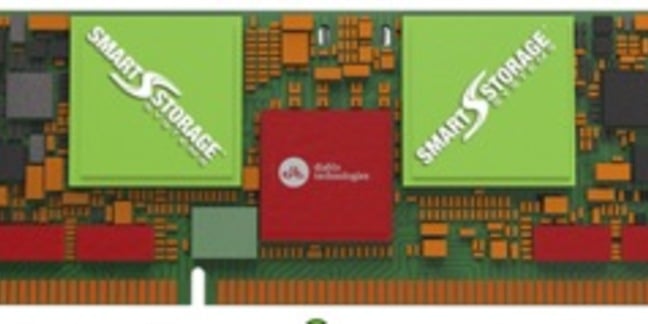 Hi-performance memory biz Netlist says it has a whistleblower's letter from inside Diablo Technologies claiming that Diablo stole Netlist's most valuable proprietary technology, HyperCloud, developed over six years at a cost of $65m.

NetList is a maker of memory virtualisation firmware and ASIC tech that lets servers handle more memory than they are theoretically supposed to be able to.

Diablo Technologies' TeraDIMM memory channel technology enables flash memory to be placed alongside a server's DRAM, giving it access to flash-stored data faster than PCIe flash cards. SMART Storage is partnering with Diablo, with SMART'S ULLtraDIMM product using Diablo's memory channel technology to link a bunch of flash chips to a server's memory bus. It seems that IBM is planning to introduce ULLtraDIMM to the market in one of its X-Series servers in January 2014.

Yet Netlist now claims that the ULLtraDIMM is based on stolen technology. It began chucking sueballs around in August this year, suing Diablo Technologies, SMART Modular, SMART Storage and Smart Worldwide Holdings, alleging infringement of five Netlist patents, based in part on the recently-announced ULLtraDIMM memory module. Netlist also claims that SMART Modular and Smart Worldwide committed antitrust violations.

According to court filings, Netlist's grounds for legal action are that:

In particular, Netlist claims Diablo (and SMART) misused Netlist trade secrets and the HyperCloud technology to create the ULLtraDIMM product and other competing products.

SanDisk bought SMART Storage in August for $307m, but it is not named in Netlist's lawsuits. Netlist lists its HyperCloud tech as enabling servers to use more memory than they are normally entitled to in standard Intel and AMD systems.

Ironically, Netlist had selected Diablo Technologies as a qualified chipset supplier for its HyperCloud memory modules back in October 2010.

Much to the apparent pleasure of Netlist's lawyers, a whistleblower's letter was received on 13 November this year. It is included in Netlist's 8-K filing with the SEC, and says:

I notice that Netlist is suing Diablo Technologies and SMART storage systems for Patent Infringements.

In my opinion, Diablo did not just infringe the patents but also stole Netlist's detailed architecture and design. ...

If you want more information then you should contact (--) who was the VP of engineering and (--) (Firmware architect). Both these gentlemen are no longer with Diablo.

Netlist's 8-K also includes other correspondence naming John Vincent as the former Diablo VP Engineering and and Sujoy Ray as the firmware architect.

The letter writer attached slides and diagrams to back the assertions up, saying:

The SEC filing by Netlist includes extracts from the letter.

What next? Until this is resolved, potential ULLtraDIMM customers will need a lot of reassurance. SanDisk, anxious to establish itself as an enterprise-class flash supplier, may decide to clear the decks by doing a deal with Netlist. ®

Reader survey Contributions anonymous, and we’ll give you a full report when it’s done