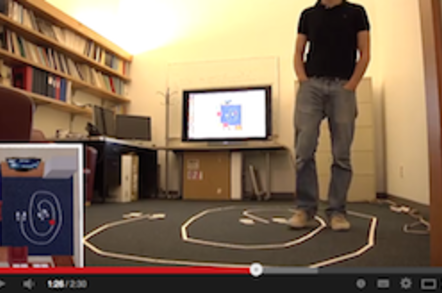 Video The MIT boffins that earlier this year demonstrated the ability to “see through walls” using Wi-Fi has now unveiled a more accurate version, WiTrack, that can locate a person in three dimensions, within 10-20 cm, through walls and obstructions.

As well as the high accuracy and lower power, the project claims to offer “coarse tracking of body parts, identifying the direction of a pointing hand with a median of 11.2 degrees. It can also detect falls with 96.9 per cent accuracy. WiTrack can be incorporated into consumer electronics and has a wide set of applications.”

That means as well as letting video games track players through the whole home, the system could be used to track the elderly (alerting relatives or health services of falls, for example), as well as letting the extremely lazy control appliances without even having to go to the effort of launching a smart-home phone app.

WiTrack uses one transmitting antenna and three receiving antennas, with FMCW (frequency modulated carrier wave) detection measuring how the target's movement changes reflected waves in their movements. This is already used in radar applications, but the authors say a through-wall FMCW system used in (for example) the military are high powered, heavy, and demanded large antenna arrays.

To help capture the time correlations needed to make WiTrack work, the transmitted wave follows a sawtooth pattern over time, from lower to higher frequencies and dropping back. This makes it easy to identify the time at which a received signal was transmitted, the researchers say.

The researchers will be presenting a paper on WiTrack at next year's Usenix NSDI'14 in Seattle. ®