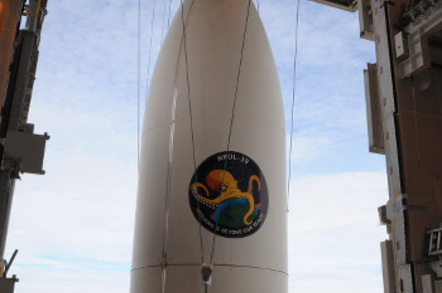 Some spook agencies like to hide their more ominous workings from the innocent public, protecting Joe Bloggs from thinking too much about the power and influence that can come with snooping on the world. But the US National Reconnaissance Office take a different approach.

Ready for launch? An Atlas 5 will blast off at just past 11PM, PST carrying an classified NRO payload (also cubesats) pic.twitter.com/ll7s0nCOPg

The NRO are totally embracing their menacing Big Brother persona and putting it out there for world+dog to see, having launched a bunch of satellites and a mysterious payload on a spacecraft yesterday - complete with the logo of a creepy octopus sucking the life out of our world.

The Office of the Director of National Intelligence (DNI) tweeted pictures of an Atlas 5 rocket bearing the NROL-39 getting ready for launch yesterday, which it said was carrying a "classified NRO payload" along with some cubesats.

The NRO is the agency in charge of designing, building, launching and maintaining America's spy satellites. The DNI said that its latest rocket would carry a dozen mini satellites co-funded by NASA as well as its unknown primary payload.

The DNI did not say just why the NRO thought that a good logo for its spy-craft would be a hugely evil-looking octopus with its tentacles wrapped around the Earth and the inscription "Nothing is beyond our reach". But Twitter users let the office know that the imagery probably wasn't the best idea in the world:

@Harbinger00 DNI may be trying to summon Cthulhu.