Decent chance of your team winning the World Cup? You'll probably want to watch it 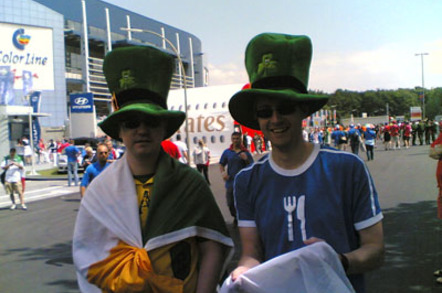 People who live in World Cup 2014 host country Brazil and supporters of bookie's favourite Germany are most active in searching for World Cup tickets, according stats from event ticketing website Ticketbis.

Brazil is the country with the highest number of entries in Google searches since July, with nearly half-a-million hits. German fans lead their country to second place in this classification of "purchase intent" with 77,000 searches. The US, a country with less of a football* tradition than countries in Europe and Latin America, placed third.

Spain, the current World Champions, were way behind in 13th position with only 4,500 searches. However, it's anticipated that Spanish fans will intensify their interest as rivals and venues are confirmed by the World Cup finals draw, due to take place in Salvador this Friday.

Social networks have also become the venue of plenty of Brazil 2014-related buzz. Facebook and Twitter are competing to grab the greatest number of posts about the competition. According to Ticketbis, 64 per cent of Spanish-speaking users comment on the Brazil World Cup via Facebook, which makes it the most visited social network to share the news about the eagerly anticipated sporting event. Twitter accounts for 36 per cent of total comments.

Over 120 "World Cup 2014" mobile applications have already been developed for Apple and Android platforms. Four in five of these apps (80 per cent) come at no charge.

The majority (around 85 per cent of the smartphone apps) provide information about the competition, such as match schedules, teams, the cities, as well as general details about the Copa do Mundo itself. Only one in 10 (10 per cent) are football games, while the remaining five per cent are either for betting or about tourism in Brazil during the period of the World Cup next June and July.