The Black Knight of the network fights on 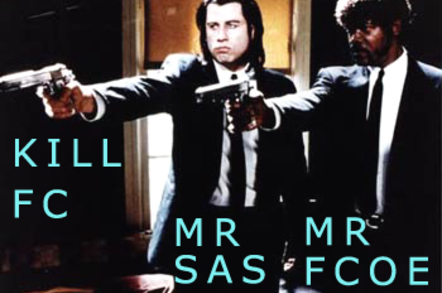 The Fibre Channel Industry Association (FCIA) has announced that a 32 gigabits per second version of the standard is just a little bit closer to reality.

The Association has let it be known that the “INCITS T11 standards committee has recently completed the Fibre Channel Physical Interface - sixth generation (FC-PI-6) industry standard for specifying 32 Gigabit per second (Gbps) Fibre Channel and will forward it to the American National Standards Institute (ANSI) for publication in the first quarter of 2014.”

This step doesn't mean 32 gig FC is done and dusted. Indeed, the FCIA calls it “a successful milestone on FCIA's Speed Roadmap for 32 Gbps Fibre Channel”. But seeing as FC is not exactly the most-contested standard in the world these days, it's hard to see this piece of work being seriously contested.

While sign-off of the 32 gig version of FC is expected next year, the FCIA thinks it will be 2015 or maybe even 2016 before products reach the market.

Just what it's reception will be by then is anyone's guess. The vendor displaying the most enthusiasm for FC has long been Brocade, but it's wobbled for years and has tried repeatedly to build a stronger Ethernet business to reduce its reliance on FC. Serving legacy FC customers will doubtless be in Brocade's plans whatever fate befalls it, but with Fibre Channel over Ethernet giving users a way to keep their FC cores without necessarily having to worry about upgrades its demise could rob the market of its champion.

Throw in the rise of stack-in-a-box products like Oracle's engineered systems and the Vmware/Cisco/EMC-powered vBlocks and the fact they've collectivley given Infiniband a leg-up and FC's future looks less assured than ever.

The FCIA clearly thinks there's demand for faster FC, with its roadmap (see below) updated in November and suggesting a 64 gig version of the technology will be developed. ®