Your browser may be up to date: But what about the PLUGINS? 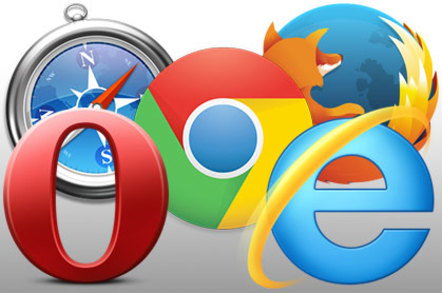 Two in five (39 per cent) of computers submitted for testing to a free browser security test from Qualys were affected by critical vulnerabilities, mostly related to browser plug-ins.

The findings, based on 1.4 million BrowserCheck computer scans, paint a picture of e-commerce buyers left wide open to attacks by cybercriminals just before the busiest online shopping period of the year. Browser vulnerabilities are routinely used to push malware at victims from compromised (often otherwise legitimate) websites through drive-by download attacks.

Chrome has close to 40 per cent of its instances afflicted with a critical vulnerability. Similar numbers apply to Firefox and Internet Explorer, which have 35 per cent and 41 per cent of their instances vulnerable to attacks. Safari (29 per cent) and Opera (34 per cent) came in as the best of a bad bunch, according to the figures from Qualys. The overall net population might be somewhat more secure because Qualys is looking at a sample of people who have taken the trouble to check their browser security.

Qualys CTO Wolfgang Kandek says that browser plug-ins were a bigger part of the problem than core security software.

"Browsers themselves are only partly to blame though; we see most of them quite up-to-date, with Chrome leading the pack with 90 per cent, Firefox at 85 per cent and Internet Explorer trailing with 75 per cent," Kandek explained. "The larger part of the problems are contributed by the plug-ins that we use to extend the capabilities of our browsers, led by Adobe Shockwave and followed by Oracle Java and Apple Quicktime."

The overall message is simple: consumers should patch up their computers (and particularly their browser plugins) if they don't want to or run a higher risk of getting pwned by banking trojans or spyware. There are various tools available.

Kandek has published further commentary on his findings - alongside a chart depicting the distribution of vulnerabilities between browsers - in a blog post here. ®