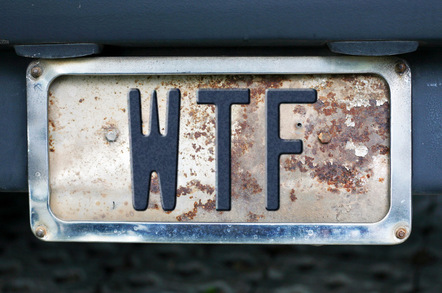 Blighty's Drivers and Vehicles Licensing Authority (DVLA) has announced a list of vehicle registration numbers which won't be available to wags looking to take advantage of the latest "63" and upcoming "14" plates.

DVLA decency monitors have also turned their attention to the 63 registration, which kicked off in September. As of March, PU63 RTY, OR63 YYY, OR63 ASM, LU63 FER, SO63 OMY, BU63 GER and HU63 NOB - plus "and a large number of plates beginning VA63", as the Independent puts it - will be added to the proscribed list.

A DVLA spokescensor explained: "The vast majority of registration numbers are made available but we have a responsibility to ensure that the combinations used do not cause offence.

"We try to identify combinations that may cause offence and having considered the appropriateness of these registration numbers we have withdrawn them as they could cause offence or embarrassment on the grounds of political or racial sensitivities or are in poor taste."

The DVLA has battled long and hard to keep the likes of NA12 ZEE and PE12 VRT off the roads, but provocative number plates do occasionally slip through the net.

A couple of years back, a Chesterfield telecoms boss told the agency to do one after it accidentally sold him "BO11 LUX" for £399, then demanded its return. ®

10 PRINT Memorial in New Hampshire marks the birthplace of BASIC

Big Red up in court yet again