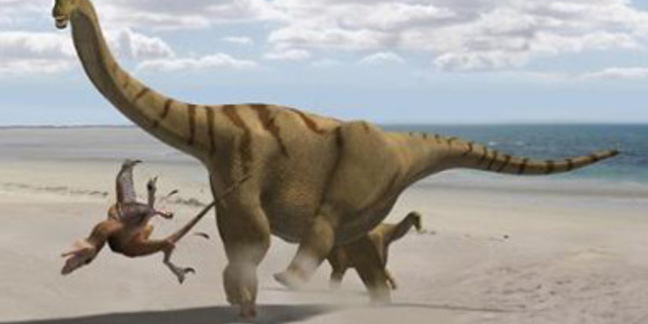 A rare skeleton of one of the largest creatures ever to walk the Earth has been sold at auction for nearly half a million quid to a mystery buyer.

A near complete 17-metre-long Diplodocus longus skeleton, aged 150 million years and widely thought to be a female, was sold for £480,000 ($779,856) on Thursday by Summers Place Auctions, in West Sussex.

The new owner is not being revealed by Summers Place, but a spokesperson for the auction house told The Reg, that the Diplodocus – nicknamed Misty - is going to a “public institution” and will go on public display. The institution will make its own announcement, the spokesperson said.

It’s not the most expensive set of pre-historic bones to go under the hammer. Sue, a Tyrannosaurus Rex sold at auction in the US in 1997, set a record at $8.36m (£5.14m) when she was bought by the Field Museum of Natural History in Chicago.

Sue was the most complete fossil of a T-Rex ever found.

The European record was set by a complete Allosaurus skeleton, sold by Sotheby’s at its first Natural History sale in Paris in 2010 – where it sold for £1.10m ($1.8m) to an anonymous bidder.

Complete and relatively complete dinosaur skeletons are rare and therefore highly sought after. The best-known example of a Diplodocus in the UK is in the Natural History Museum in London, but this is a plaster cast of 356 bones from a near complete beast found in the western US in 1898 and held at the Carnegie Museum of Natural History in Pittsburgh, Pennsylvania. Missing bones were made from casts of bones from four other specimens.

The Natural History Museum is reported to have ruled itself out of bidding for Misty.

Misty was found by the children of dino hunter Raimund Albersdörfer in a quarry in Wyoming and prepped at a fossil laboratory in Holland before being assembled in the UK. ®

Video Brits catch God yet again screwing with our heads