Noisy qubits destroy data in order to save it

Just when you thought quantum computing couldn't get any weirder ... 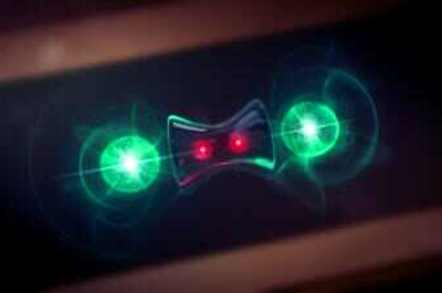 Scientists from NIST and the University of Copenhagen have persuaded a handful of atoms to get into a tangle by shedding their heat into the outside world.

What's odd about this – if there's anything in the world of quantum computing that can't be described as “odd” – is that in doing so, their qubits were leaking information as well.

Typically, NIST explains, quantum entanglement experiments do whatever they can to avoid noise, because noise can destroy entangled states (or, The Register supposes, can make it impossible to measure the entangled state, but don't hold us to this).

Instead of fighting noise, the boffins coupled their ions to the outside world as a technique to shed the heat. Two beryllium ions acted as qubits in the experiment, partnered with two magnesium ions. The job of the magnesium ions was to let the beryllium ions leak their unwanted quantum states as heat. 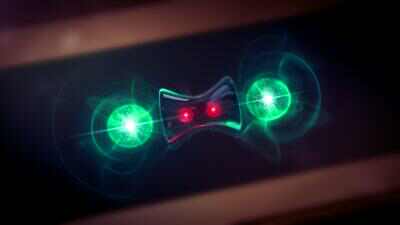 Visualisation: The green magnesium ions act as "heatsinks" for

Two lasers created the entangled state, and the resulting qubit was, as NIST writes, “induced to 'leak' any unwanted quantum states to the environment through continuous application of microwaves and one laser beam. The unwanted data were coupled to the outgoing heat in such a way that the qubits were left in only the desired entangled state—which happens to be the point of lowest motional energy, where no further heat and information is released to the environment.”

The microwaves and laser cool the atoms by acting at the right frequency to damp the motion of the atoms, rather than adding heat to the system (El Reg has discussed this phenomenon in the past).

What the scientists want is to reduce the possible motion of the ions to either spin-up or spin-down, with no other motion. When that's achieved, they can create three possible correlations: both ions in spin-up, both in spin-down, or one-up-one-down. The superposition the experiment sought is in which spins up-down and down-up exist at the same time.

“If the two spins are in the desired entangled state and the lowest motional energy state, they are unaffected by all laser and microwave fields,” NIST writes.

Once that state was achieved – in other words, once the qubits had shed unwanted movement (and therefore information) to the outside environment – the researchers say they were able to get the qubits into the entangled state they wanted 75 per cent of the time. Moreover, the setup they used only needed a few seconds to get into the desired target state. In a separate experiment, the researchers found that by repeating the steps they used to achieve the entangled state, they were able to get an 89 per cent success rate.

As well as being noise-tolerant, the entanglement could be achieved whatever initial state the ions held.

And as a reminder that the quantum world is weird, NIST researcher John Gaebler says: “There are … architectures in which, for example, one couples a quantum computer to a specific noise environment, and the resulting state of the computer contains the solution to the target problem”. ®