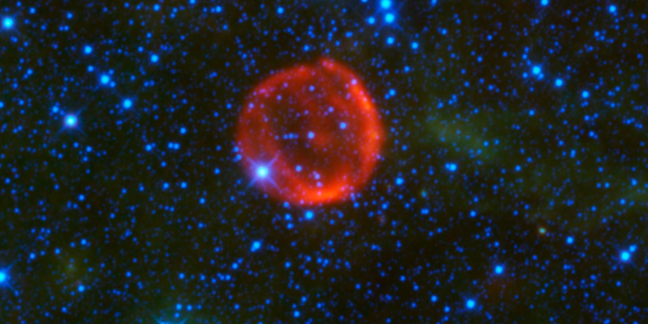 Many thousands of years ago, far away in the constellation Cassiopeia, a white dwarf star blew up with cataclysmic violence. Much, much later, in the year 1572 when good Queen Bess was on the throne, the light of the supernova reached Earth. Now, astronomers probing the vast cloud of slowly cooling gases left behind say they have made a remarkable series of discoveries. 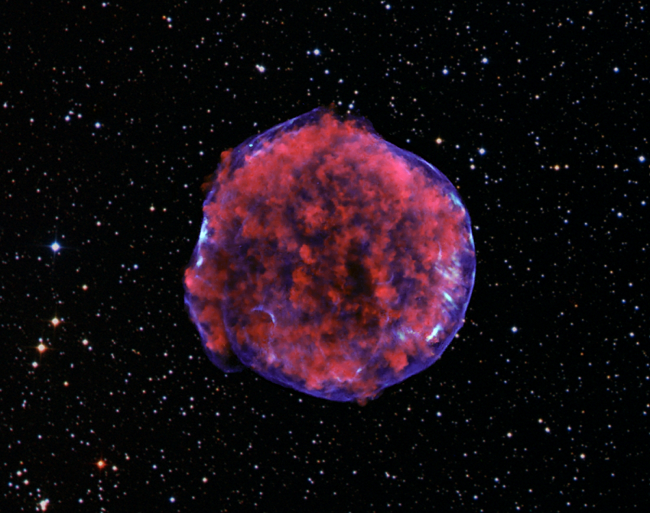 An excellent pic of the cooling cloud left behind after the explosion. Full hi-res here courtesy CfA.

In particular, it seems that in addition to the regular outward-bound shockwave created when the dwarf star blew up - which is moving outwards at around 300 times the speed of sound as it travels in those parts - a "reverse shockwave", caused when the expanding supernova wave crashed into the thin interstellar gases surrounding it, is also hurtling inwards at no less than Mach 1,000.

This reflected implosion front is seemingly causing the remnant puff of galactic smoke left after the fireball to stay hot and emit X-rays, so enabling it still to be seen even though the light reaching us from the area was emitted more than 400 years after the explosion. (In actual fact the remnant itself is probably comparatively boring to look at close up, having blown up for real back in the era of the Pharaohs or earlier. It's often known as "Tycho's supernova" or similar here on Earth, however, after the sixteenth century golden-nosed Danish astronomer Tycho Brahe - one of the first to study it.)

"We wouldn't be able to study ancient supernova remnants without a reverse shock to light them up," says Hiroya Yamaguchi of the Harvard-Smithsonian Center for Astrophysics.

According to an announcement from the Center:

The team studied the X-ray spectrum of Tycho's supernova remnant with the Suzaku spacecraft. They found that electrons crossing the reverse shock wave are rapidly heated by a still-uncertain process. Their observations represent the first clear evidence for such efficient, "collisionless" electron heating at the reverse shock of Tycho's supernova remnant.

Yamaguchi's colleague Randall Smith says the kilo-Mach implosion blast front is "like the wave of brake lights that marches up a line of traffic after a fender-bender on a busy highway".

The two men and the rest of their crew have had their latest Mach 1,000 X-ray brakelight blast boom fireball supernova remnant boffinry accepted for publication in the Astrophysical Journal. ®