Got a NAKED Jelly Bean Samsung S4 or HTC One? Maybe it's time for a KitKat

Google squirts out 4.4 to yet more devices 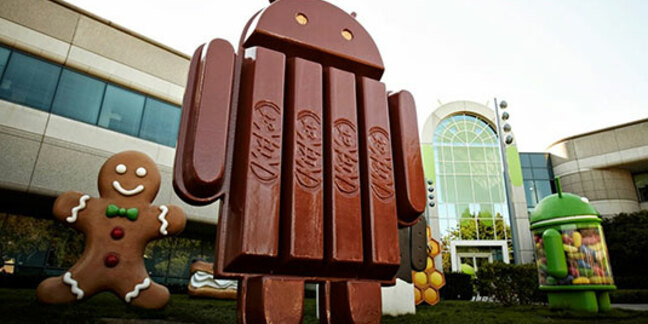 Google has begun to roll out version 4.4 of its Android KitKat software to Google Play editions of the Samsung Galaxy S4 and HTC One.

These special editions of the phone use the same hardware as other versions, but do away with the extra proprietary tweaks added by manufacturers. Kitkat has also been made available for the Nexus 4, 7 and 10.

Motorola's Moto X was one of the first smartphones to be upgraded to Android Kitkat and customers on Verizon Wireless were the first to receive the update last week.

The latest Android has been rolling out in increments over the past month and was first made available for the Nexus 5. When this mobe was released, we described it as the "best smartphone bang for your buck".

Discussing KitKat, our scribe said: "As operating systems go it's preferable to its immediate predecessor – a little faster and smoother with some nice features in the email client and messaging sphere – but there's nothing here that's a must-have feature."

So feel free to take a break before downloading the latest operating system. ®

Same specs, but now it's a Pro