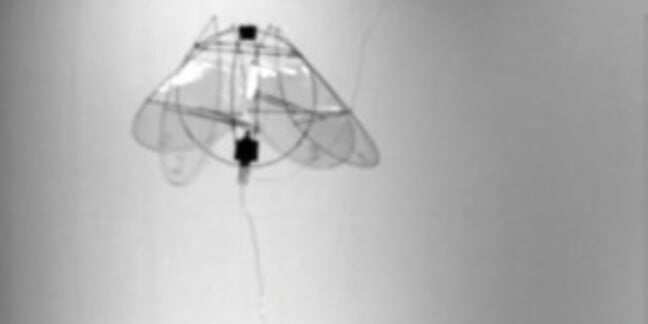 Boffins have already come up with mini-robots that can fly like helicopters and others that fly like insects – but the latest flying bot moves through the air rather unusually, in the same way that a jellyfish swims. 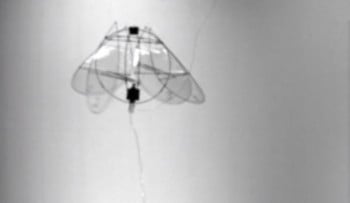 Still from a video of the jellyfish flying bot, which can be seen here.

Researchers have built a bot whose flying motion uses the same movements as the boneless, pulsating swimming of the jellyfish underwater.

While insect flight is a natural thought for most when they think of trying to build a small flying robot, the problem with insect flight is that their flapping wings are frequently inherently unstable, according to Leif Ristroph of New York University.

Flies have to constantly monitor their environment to sense every gust of wind and passing predator, making lightning-flash corrections almost all the time just to stay in flight and manoeuvre around. Trying to recreate that kind of control in a tiny robot is extremely difficult for engineers.

Instead, Ristroph came up with a new type of flight that doesn't need a feedback system or control to be stable, using similar motions to a jellyfish. Their prototype device weighs just two grams and is just 8cm wide. To fly, the bot flaps four wings that are arranged like the petals of a flower, mimicking the up-and-down motion of a pulsating jellyfish.

The flight of the fluttering jellybot, in which it flaps its four wings 20 times a second, could end up looking more like that of a moth than anything else, but it can hover, ascend and fly in a particular direction. However, it is limited by being attached to an external power source and it can't steer, either by itself or by remote control.

Although a practical robot is still pretty far off, the boffins are happy that the prototype shows a proof of concept of the type of flight, which could give a blueprint for more sophisticated and complex bots. The prototype also has a simple design, helping scientists with their ultimate goal of making flying robots just the size of a centimetre so they can squeeze into small spaces and get around undetected - making them handy for surveillance as well as search-and-rescue and atmosphere and traffic monitoring.

Ristroph and his colleague at NYU, Stephen Childress, presented their prototype at the American Physical Society's Division of Fluid Dynamics meeting yesterday. ®