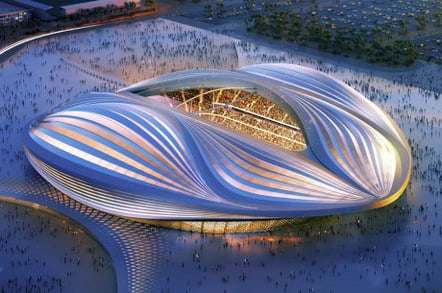 Qatar has unexpectedly delighted international pundits by unveiling the design for its 2022 World Cup Al Wakrah stadium, whose roof is designed to represent "the sails of the Arabian pearl fishing boat the Dhow", but actually bearing more than a passing resemblance to a woman's nether regions. 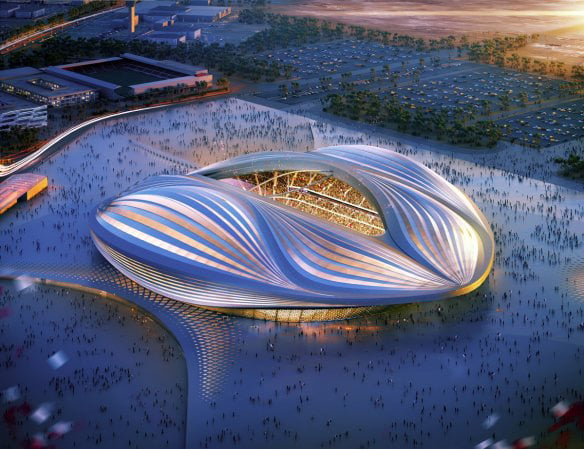 Zaha Hadid Architects and international "provider of professional technical and management support services" AECOM whipped the covers off the stadium a few days back, and the eyebrow-raising kicked off almost immediately.

Callie Beusman, down at Jezebel, declared: "Any discerning human will be quick to recognize that the building looks exactly like an enormous vagina."

When quizzed by Esquire, Cosmopolitan's "Sex & Relationships Editor" Anna Breslaw said: "I'm no expert,* but I think those are labia, yeah."

Far from condemning the building, female commenters reckon it's a step in the right direction. Beusman said "it's about time we pay some architectural respect to the yoni", while Holly Baxter down at the Guardian called the structure "most gratifying".

She added: "Perhaps the bigwigs who will be running the stadium should embrace this so-called faux pas and rebrand it as a deliberate nod towards the increasingly liberal Qatari policies concerning women in sport."

The 40,000 seater venue is slated for completion in 2018, according to Building.co.uk. Things could get pretty sticky inside during the Qatari summer, when the mercury nudges 50°C, so the design boasts some serious tech which will lower the temperature to 26°C on the pitch. The stadium also boasts "demountable" top tiers which will be removed after the World Cup and "erected in developing countries". Ooooh matron. ®

*Given that Breslaw was speaking in an "Ask An Expert" piece, her admitted lack of expertise in the matter is disturbing, both journalistically and gynaecologistically.

**It's inevitable that if the stadium goes ahead in its current form, wits worldwide will have a field day. No doubt the matter of a nickname, a la Gherkin, is first on the agenda, but after that the possibilities are endless.

We'd like to suggest that for games played at the Al Wakrah, the disagreeable practice of flying theatrically through the air in the penalty area be dubbed "muff diving".

No idea how they got there, prisoner insists