Google's Schmidt predicts end to global censorship in a DECADE 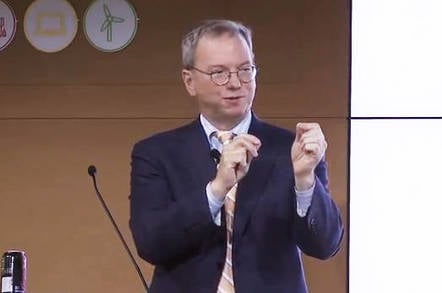 Google executive chairman Eric Schmidt has been shooting his mouth of again – this time predicting the end of global internet censorship within a decade.

The Chocolate Factory supremo was speaking at Johns Hopkins University on Wednesday.

"First they try to block you; second, they try to infiltrate you; and third, you win. I really think that's how it works. Because the power is shifted," he said, according to Reuters.

"I believe there's a real chance that we can eliminate censorship and the possibility of censorship in a decade."

It’s a bold prediction but not one China is likely to agree with anytime soon, given the huge resources and political will behind its vast censorship apparatus, dubbed the Great Firewall.

In fact, it’s more than likely that Schmidt’s optimistic words will go down in history alongside Bill Gates’ famous declaration back in 2004 that spam would be a thing of the past by 2006.

China is not the only country censoring the interwebs, of course, but it is the most sophisticated.

Schmidt also had a few words for the NSA, claiming that “with sufficiently long keys and changing the keys all the time”, encryption can be a decent foil to snooping spooks.

"It's pretty clear to me that government surveillance and the way in which governments are doing this will be here to stay in some form, because it's how the citizens will express themselves, and the governments will want to know what they're doing," he added.

"In that race, I think the censors will lose, and I think that people would be empowered."

Whether the global population can escape the tyranny of Google’s data slurping Street View cars, of course, is another matter. ®