It's all about app delivery now 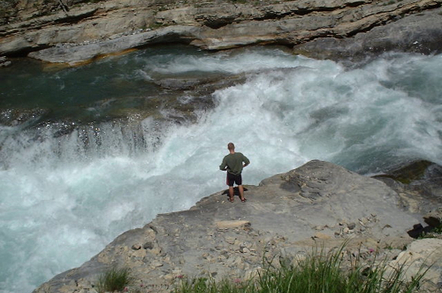 Bare WAN optimisation is becoming a shrink-wrap product strategy, with little growth forecast, so Riverbed is grouping its associated products into a higher-growth market which it estimates is worth about $11bn: remote application access and management.

Riverbed's Steelhead is a WAN optimisation appliance which works to reduce the number of round-trip messages needed in an IP network when data is sent across a wide-area network (WAN) to locations such as remote and branch offices. This helps overcome the drawbacks of long latency and limited network bandwidth leading to slow-response systems in such network edge locations.

But it turns out you can do more by pre-preparing data, such as web pages, to be sent and adding server-type facilities to the edge appliance so you can get rid of separate servers at the distant offices. Riverbed's Granite product is the remote office server replacement and its Stingray technology the technology used at the source end to prep data for delivery - it's called an ADC (Application Delivery Control) product.

Then Riverbed also offers NPM (Network Performance Management) and APM (Application Performance Management) products like Cascades and OPNET respectively. Combine these four types of technology, counting NPM/APM as one, and Riverbed says we have a Location-independent Computing (LiC) platform for the Application Performance Infrastructure market. According to the firm, this segment is worth a cool $11bn and is growing at a rate of over 5 per cent annually.

It spread this message at an analysts' event. What did they think? Jason Ader of William Blair writes: "Management believes firmly that the WAN optimisation market is not dead and ostensible headwinds such as SaaS could actually be tailwinds as Riverbed further adapts its Steelhead product line to address popular SaaS applications such as Office 365."

He referred to OPNET problems: "Riverbed believes its rationale for acquiring OPNET—to create an end-to-end visibility solution for both networks and applications—is intact, with the integration heavy lifting now in the rearview mirror and early signs of a product revenue rebound."

How fast will the revenue waters flow along the Riverbed in 2014? Will we see white waters? Watch and wait. ®