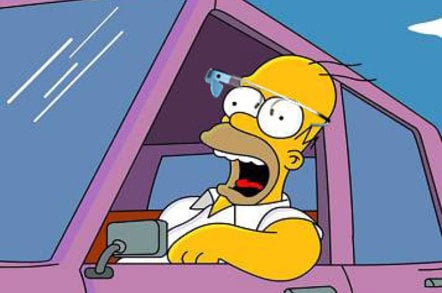 Google has unveiled what it's calling a "sneak peek" at its Glass Developer Kit (GDK), a new way to write software for the Chocolate Factory's privacy-stomping future-specs.

Previously, developers who have wanted to write apps for Glass have had to use the Mirror API, a set of interfaces that make it possible to build services that run on the web but are designed for, and interact with, the devices.

With the GDK, coders can now write a new kind of "Glassware" – Google's term for software created for the head-mounted tech – that installs and runs directly on the hardware itself.

This has always been at least feasible. Glass runs a version of the online ad giant's Android operating system and it ships with 12GB of usable storage, so anyone sufficiently skilled at Android app development should in theory be able to write Glass apps, too.

What the GDK provides is a set of APIs that give developers access to the unique capabilities of the Glass hardware, including such features as the voice recognition subsystem, the gesture detector, and the "cards" system that forms the core of the Glass UI.

The GDK isn't meant to replace the Mirror API. Developers can still choose to use it if they wish, and they can even build applications that mix Mirror API code and native Glass apps written with the GDK.

"We designed the Glass platform to make the existing Android SDK just work on Glass. This lets you do code in a familiar environment, but for a uniquely novel device," Google's developer documentation explains. "In addition, you can use all of the existing Android development tools, and your Glassware is even delivered as a standard Android package (APK)."

One thing you will need to develop GDK Glassware, however, is a Glass unit. Unlike when you develop apps for Android smartphones, there is no emulator provided to test your Glass apps on, so you'll need to install them on an actual pair of specs to see them work.

Google also says it plans to make available a more mature "developer preview" version of the GDK sometime in the next few weeks, so it's probably safest to assume that the current versions of the APIs are subject to change.

The "sneak peek" version of the GDK is available beginning on Tuesday as an add-on for the base Android SDK. Interested developers can install it via the Android SDK Manager, per instructions available here. ®