Micron takes on Intel with 'breakthrough' processor for streaming data

Automata processor cuts through NP-hard problems like they're butter 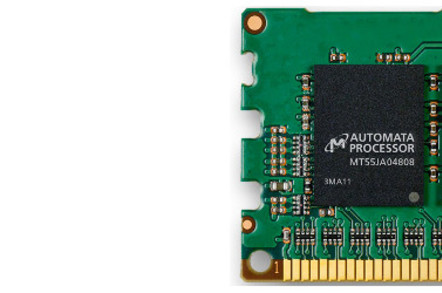 Memory specialist Micron has announced a new accelerator processor that it claims outperforms Intel's chips when it comes to dealing with streaming data.

The "Automata Processor" was announced by the company on Monday and billed as a device that uses the inherent parallelism of memory architectures to speed the ingestion and processing of large data sets.

Potential applications of the chip include genomic analysis and various security tasks such as the classification of online video footage.

The chip should be available in 2014 and the company has taped out the first silicon, it said.

Each Automata Processor uses a DDR3-like memory interface, and will be made available either as standalone, or in DIMM modules. It has an inter-chip bus, and has a power draw of around 4 watts.

In tests, a cluster of 48 of the processors on a PCIe board comfortably beat a 48-chip cluster of Intel Xeon 5650s when trying to complete a tough 'Planted Motif Search' problem.

The design is based on an adaption of memory architecture and exploits "the inherent bit-parallelism of traditional SDRAM," according to a Micron paper describing the technology. This sets it apart from Intel's "Xeon Phi" accelerator, which gets its number-crunching skills from an array of many, many low-power wimpy x86 chips.

As it is designed as an accelerator, it will need to piggyback on a typical processor, though this could take the form of a low-power ARM chip. It will also be tough to program for, though Micron says it is working with researchers to ease this issue. ®