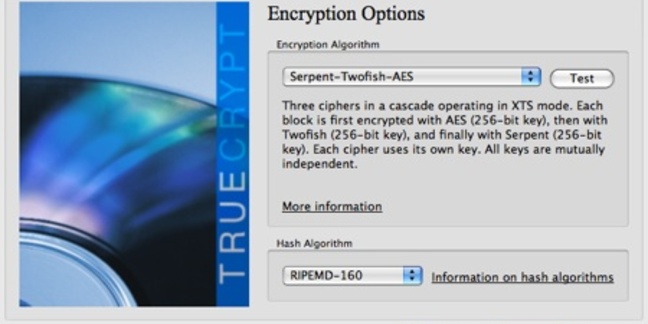 Interview A TrueCrypt audit project has uncovered a well of technical support with its plans to publicly audit the widely used disk and file encryption utility for the first time.

TrueCrypt is a widely used utility that encrypts and decrypts entire drives, partitions or files within a virtual disk. The tool can also hide volumes of data on discs.

The TrueCrypt audit project raised enough money to pay for a professional review of the software within days of its launch. The Register recently caught up with one of the two founders of the project – Kenneth White, principal scientist at biotechnology firm Social & Scientific – to find out more about where the project goes from here.

The Reg: You've achieved your early funding goals but will carry on accepting donations because there's much more you'd like to do, such as the bug bounty?

Kenneth White: On IndieGoGo, you have to set a funding time range, so the 60 days was arbitrary, and, at the time we thought $25,000 was a pretty ambitious stretch goal. It turns out we hit that target in the first four days of the campaign.

But yes, we've set our sights high in terms of what we would like to accomplish. We have formed a technical advisory panel and are discussing different strategies to make best use of our funding, perhaps a combination of professional security engineering analysis, academic review and public research.

We are also in talks with a couple of non-profits who have offered to co-sponsor the work, but several details [need] to be worked out.

The Reg: Are there any historic precedents for your project? Do you think the same idea could be applied to evaluating other security packages? I understand that you want to do TrueCrypt first but am wondering if this type of kick-starter idea might be applied to other security projects, by yourself or others, in future?

White: The closest with TrueCrypt was by the 2008 review by engineers working with privacy-cd.org.

But more broadly, the best model we have seen - and [one which we] hold as our standard - is the recent public review (PDF) of SecureDrop by the University of Washington CS Engineering Department, along with Bruce Schneier and Jacob Applebaum.

The Reg: A security researcher has compiled TrueCrypt 7.1a for Win32 and matched the official binaries. Xavier de Carné de Carnavalet, a master's student in information systems security at Concordia University, Canada, claims he achieved what few others have managed so far. I know confirming the Win executable matches the source code was one of your goals. So does Xavier's work satisfy this or is further confirmation needed? Is Xavier affiliated with yourselves?

White: It's a necessary first step, and we were impressed by Xavier's work. He's not affiliated, but has offered to help. He's a very talented engineer, and very humble.

The Reg: What does the future hold?

White: With the recent NIST recall and subsequent third party review of their entire "body of existing cryptographic work", I suspect there will be many more stories to come. ®