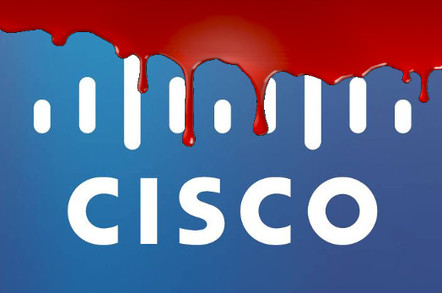 Analysis Networking giant Cisco lost around $10bn in market value last week as investors sold out in response to weak earnings and poor growth projections. Worse yet, some of its biggest customers – from Amazon and Google to social network giant Facebook – are implementing technologies that will allow them to reduce their dependence on the networking giant.

This spells some serious trouble ahead for the company with a shift in how some of its biggest customers buy networking equipment.

Meanwhile, spending on mobile devices is rising at the expense of traditional PC purchases, which in turn encourages the use of apps operated by or hosted on platforms owned by these companies – and they don't like Cisco.

Amazon Web Services, for instance, is building its own networking switches so it doesn't have to rely on the "black box" technology produced by companies such as Cisco, Amazon's chief technology officer Werner Vogels confirmed to The Register.

"It is clear that networking has for a very long time been a black box. They don't even come with APIs," he explains. "This is the history that forced us to really look at way networks are laid out and build [devices] and do [it] ourselves. Also the cost – everything else in our data centre [is] more efficient."

Google is thought to have been operating its own custom networking gear as well for several years, and has recently loaded its own custom software-defined networking technology onto its wide-area networks. In September, 2012, a mysterious "Pluto" switch meant for Google turned up at a branch office in Iowa due to a shipping error.

Social web giant Facebook is also fleeing the company by working with a cross-industry group to develop a specification for an "open" switch that will be made by a low-cost original device manufacturer like Quanta or Wiwynn.

What unites these customers is that they are part of a new wave of companies that have grown sufficiently large that they have a motivation to control everything in their supply chain: and control is something that Cisco always tries to keep for itself so it can extract lucrative service fees from punters.

Cisco, and contemporaries Juniper and Brocade, have built closed switches and routers for decades to help companies shuttle around data center traffic. They have closely guarded the inner features of their technology, and every release with it brings a wealth of new features for their platforms that requires a legion of people armed with certifications and arcane experience to manage.

Now, some of the world's biggest data centre operators are running away from the traditional companies, and going to Asian device manufacturers for low-cost gear designed by their own teams.

Whenever we've asked Cisco about this looming threat, the company typically argues that these people have reached a scale that they no longer form the majority of Cisco's target market.

There are two critical problems with this market: these companies, especially Amazon Web Services and Google via Compute Engine, are cannibalising on-premise IT spend as companies move to their compute clouds, and by pioneering these new approaches the fleeing firms will create an ecosystem of accessible, low-cost Cisco-beating kit.

In Cisco-land, all businesses need pricey networks to deal with a deluge of devices and "the internet of things". All of these businesses operate their own networks, and will need glossy equipment for complex tasks.

In reality, many businesses IT departments are being hollowed out by cost-cutting and cloud shifts, and small businesses may not operate any hardware at all. Large enterprises, meanwhile, are growing to the point that they can now command the economies of scale that let them do their own hardware – Goldman Sachs, for instance, is a member of Facebook's open hardware scheme.

There's also the recent issue of revelations around NSA spying, which may severely impact Cisco's ability to sell to governments that feel the US may want to compromise them. By example, Cisco's sales to China have been plummeting.

In fact, the only cloud market we can see growing as a consequence of all of these shifts are those operated by telcos. Cisco will continue making wads and wads of cash here, but will it be enough to replace the hollowing out of the market as a consequence of a major shift to mobile devices and clouds? Doubtful.

Cisco may also say there are some markets that will never use the cloud due to security concerns, and will have a need for the types of serviceable kit operated by Chambers & Co. That may very well be true, but the awarding of a $600m private cloud contract for the CIA to Amazon indicates that even the most secure workloads may shift to these new IT suppliers.

All these factors seem to favor the custom networking schemes of the larger providers, and where large providers go the rest of the world tends to follow, as we have seen in the widespread adoption of Linux, lower-cost storage hardware, scale-out systems like 'NoSQL' databases and the Hadoop analytics stack, and others.