Yet another business advisor told Labor NBN was a dud: reports 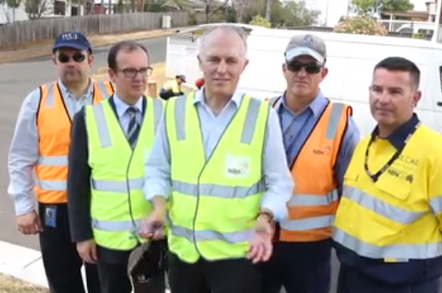 Another shot has been fired in an election campaign that has so far continued more than sixty days beyond the conclusion of the ballot, with Australia's new communications minister Malcolm Turnbull calling on the former government to publish a report it received in 2010.

The basis of the demand is a leak via News Limited, which apparently proves that the entire fibre network proposed by the former government is even more of a dead duck than, say, the late-and-over-budget model proposed in Blighty. The report insists nobody would invest in a 20-year project and is quite certain that the NBN would never turn a dollar because of the golden wireless future that awaits us.

The company that put together the report, Lazard, describes itself as a global financial advisory and asset management firm. Its Australian operation was created in 2007 when it acquired a local firm called Carnegie, Wylie and Company.

Lazard's prior exposure to telecommunications and media business amount to:

With that as background, what are Lazar's key statements about the NBN?

1. That Telstra would have the “option to compete with the NBN” while receiving funds from it.

This represents a fundamental misunderstanding of the roles Telstra and NBN Co were to assume, had the project gone ahead in its original form: by the end of the project, Telstra would have ceased to be an owner of fixed line connections to the household, and similarly ceased to be a wholesaler of those services.

This was, in fact, an important plank of policy for the new communications minister, during the election campaign: that the NBN Co created an undesirable monopoly that undermined the principles of infrastructure-based competition.

2. That “projected customer take-up and average return per user were likely to be proven optimistic in such a competitive industry”.

The ARPU question is probably one of the most contentious in the whole NBN project, since it is key to the business case.

However, Lazard seems to subscribe to the idea that adoption of the fibre service would remain optional. This was never in the long-term plan for the NBN: as a monopoly wholesale infrastructure provider, it would have no fixed line broadband competition for households.

The only question is if any infrastructure NBN Co did not own could compete ...

3. “Lazard … pointed to anecdotal evidence that 20 per cent of premises could ultimately be wireless-only.”

...like this one. Yes, there is and has been an active debate about the likely role of wireless.

However, the contribution of “anecdotal evidence” to the analysis of a serious business case is completely useless. If that's the quality of work Lazard conducted for the former government, they probably buried the report to try and avoid anyone finding out they'd actually paid money for it.

The Register is happy to join with Mal the Builder in calling for the release of the report. We could do with the laugh. ®