Nothing to SNIA at: Not dissing storage specs now, are ya? 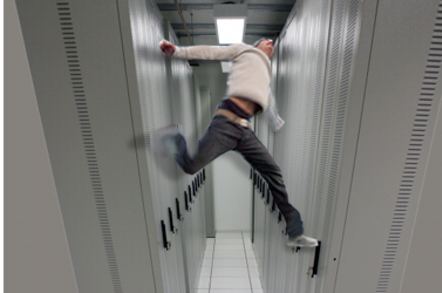 We also talked about other things, like how the SNIA is becoming a more globally focused organisation, its work in the building of standards as well as the IT industry in general.

It appears in the world of software-defined everything, vendors are beginning to realise that they need standards to make this all to work. Although it is possible to write plug-ins for every vendor’s bit of kit; there is a dawning realisation among the more realistic that this is a bit of a fool’s errand.

So after years of dissing things like the Storage Management Initiative – Specification (SMI-S), a certain large vendor which is making a large play in the software-defined storage world is coming to the table. A company which in the past have been especially standards non-friendly…

Of course, it is busy trying to work out how to make its software-defined-storage API the de facto standard, but it is still quite amusing to see SMI-S dotted all over presentations from EMC.

But I think that it is a good point and important for us customers: standards to control and manage our storage are very important, we need to do more to demand that our vendors start to play ball. Storage infrastructure is becoming increasingly complex due to the new silos that are springing up in our data centre.

It may well to be too early to predict the death of the Enterprise-Do-Everything-Array but a vigorously supported management standard could hasten its demise. If I can manage my silos simply, automating provisioning, billing and all my admin tasks, I can start to purchase best of breed without seriously overloading my admin team.

But why is EMC playing in this space? Perhaps because it has more silos than any one company at the moment and it needs a way of selling them all to the same customer at the same time…

Compelling development for SC, much less so for PS Series