Something's gotta juice all those servers, and it won't be fossil fuels forever 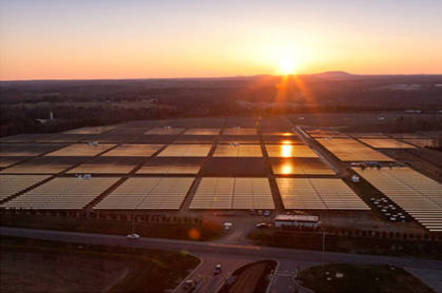 Google will invest $80m in solar-powered plants as it keeps in mind exactly what may end up powering its data centers in future.

The ad giant and investment firm KKR will work together to bankroll the construction of six new solar farms in the American Southwest. The facilities are slated to be built in the desert regions of Arizona and Southern California. The plants are set to go online in the early months of 2014.

According to Google, the completed facilities will, at their peak, generate some 106MW of electricity, enough to power 16,000 homes.

"These investments are all part of our drive toward a clean energy future — where renewable energy is abundant, accessible and affordable," wrote Google head of corporate finance Kojo Ako-Asare.

"By continuing to invest in renewable energy projects, purchasing clean energy for our operations and working with our utility partners to create new options for ourselves and for other companies interest in buying renewable energy, we’re working hard to make that future a reality."

The investment will expand upon a renewable energy effort that Google says has included more than $1bn worth of investments. The company has been investing heavily in areas such as solar, wind and hydroelectric power.

Earlier this year, the company said that it was working with US utility provider Duke Electricity on a $600m data center expansion plan that will include incentives for firms that tap into alternative energy sources.

Google is not alone in its push for green technology headlines. Fellow web provider and data center power hog Facebook has unveiled plans to build a facility in Iowa that will rely entirely on wind power. ®