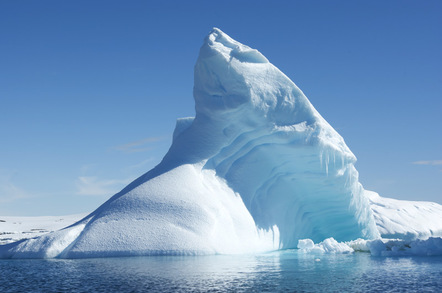 The Register's standards soviet is today calling for an international symposium of iceberg experts and builders with really, really long tape measures to settle once and for all just how to quantify titanic Titanic-busting ice mountains.

In a report this week on a massive lump which has detached itself from Antarctica's Pine Island Glacier, the BBC has flown in the face of previous standards - its own included - in describing the behemoth as a "Singapore-size ice island".

In August 2011, ScienceDaily set a provisional iceberg standard of the "Manhattan", when delineating a rogue chunk of the Sulzberger Ice Shelf.

This represented a manageable 60km², and it was reasonable to suppose that all subsequent 'bergs might be measured in multiple Manhattans. In which case, the Pine Island Glacier monster's 700km² surface is 11.7 Manhattans.

However, not content with throwing the Singapore into the mix, the Beeb has also dissed its own Berlin, which it used in November 2011 to predict the potential size of the pre-breakaway Pine Island Glacier berg. It said: "US space agency (Nasa) researchers expect the eventual iceberg to cover about 880km² – an area the size of Berlin."

This simply won't do, and we intend to to takes steps. Naturally, we don't expect the establishment of the International Iceberg Standard (IIS) to be a pain-free process. For starters, we'll be bringing our own nanoWales (20.78m²) and multiples thereof to the table, to challenge ScienceDaily's Manhattan.

To discredit the BBC's claims, we'll invite a member of the Taxpayers' Alliance to present a freedom of information request response demonstrating how the Corporation blew £1.5 million of licencepayers' cash formulating multiple, conflicting standards.

Finally, if the history of the Greenwich prime meridian is anything to go by, we fully expect the French to roll up angrily waving baguettes and demanding the world's icebergs bow to the Paris Metropolitan (17,174km²). ®

As ICO goes on fact-finding missions over 'concerns' about security, transparency

US body says time to raise the bar

New Horizons: Pluto? Been there, done that – now for something 6.4 billion km away

Kuiper Belt explorer will have next rendezvous in 2019