What are you doing right now? You'll remember this day FOREVER 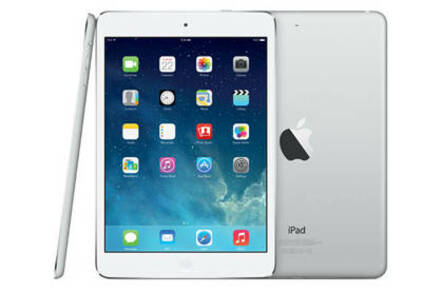 OMFG! It's true! All the signs and portents have borne fruit. After the ritual disembowelling of an Apple support tool, auguries foretold that on this day a new iPad should come forth, and lo, the Apple stores verily did shut down. Then as the day dawned, behold, even such an iPad did appear.

It is the Retina iPad Mini, which - if you'll pardon us for getting technical for just a moment - is much like an iPad Mini, but with Retina*. It does not yet have "Pro" or "Air".

You should now use your current fondleslab one more time before smashing it to bits, to order a new one in "space grey"** or "silver" from the Apple Store. They will want anything from £319 (16GB Wi-Fi) to £659 (128GB with mobe data). Don't forget to choose lots of memory, because as with all such Apple products these babies aren't expandable. Oh, and don't smash up your old and now-crappy, uncool, unbearably démodé 'slab just yet actually, it may take up to ten days to get the new one.

More unbearably exciting coverage to come, probably. We would have liveblogged overnight, but we had to stick some pins in our eyes.

*To get even more technical, "Retina" means there are more dot thingmys in the display, so many you may not be able to tell.

**Space is not grey.