Aided by Google, envied by MySQL users, and she has GORGEOUS new features 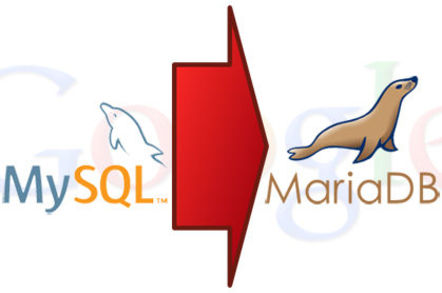 MariaDB has capped off a dazzling year with the release of a beta of Version 10 of the free MySQL replacement.

The beta of the database was announced on Thursday and sees the technology gain some features that can't be found in the MySQL database upon which it is based, further driving a wedge between it and the Oracle-backed technology it was created to displace.

"People in the past few months started to understand the value of MariaDB," the organisation wrote on its blog. "There is a good group of people and companies that have been trying out and using the MariaDB 10.0 alpha releases and providing us with excellent feedback."

That "good group" reads like a who's who of tech, with companies such as Google replacing all internal production MySQL servers with MariaDB; Red Hat making it its new storage engine; Fedora making it the default implementation of MySQL in Fedora 19; the foxes over at Mozilla migrating to it; as well as many others.

Version 10 of the database comes with several merged features and functionality from MySQL 5.6, along with enhancements to replication, optimisation, and administration.

One key feature is the Google-sponsored "Parallel Slave" tech, which chains the speed at which slaves write changes to the amount of insert or update operations occurring on the master.

"Parallel replication has the ability to remove bottlenecks in replicated configurations, which is crucial as storage speeds increase to keep systems moving quickly," Google wrote in a blog post commenting on the release.

It has also received a swathe of other upgrades to make it better at coping with replications in large installations.

MariaDB can now store data in more places than ever before as well, and can integrate with storage engines including Cassandra, Connect, Sequence, Spider, and TokuDB.

Administrators of large MariaDB clusters may breath a sigh of relief as well, with the a range (geddit? – Ed) of features to ease management of the system. Data-wranglers can now create roles to allow them to assign permissions to certain users, and can use a SQL command to shut down a server, among other features.

"This release takes the MariaDB 10.0 branch from alpha to beta status, where the team will shift focus from stabilization to bug fixes. Google’s move and support of MariaDB doesn't affect our Google Cloud Platform’s Cloud SQL offering for developers," Google wrote. ®