An end to the menace of insensitive skinny gadgets 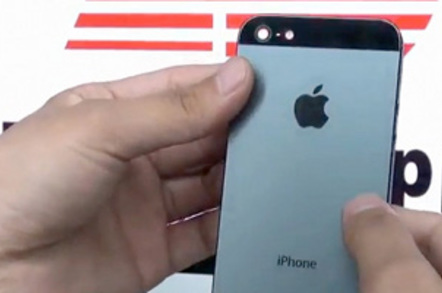 Apple is building a new, larger, curved iPhone which will include pressure-sensitive sensors to detect how hard fanbois squeeze and fondle their small slab, it has been claimed.

According to a report on Bloomberg, an unnamed Apple source said a new iPhone slated for release next year would include a larger display with glass that curves down at the edges.

The frowning phone will also come complete with unprecedented pressure sensitivity which can work out the amount of force that's applied by a user on the glass screen. This ability to tell a slap from a tickle could be handy for a number of reasons. Firstly, it could offer another way of navigating through the phone, perhaps allowing a new way of flicking through apps by adding a Z dimension to the X and Y which already exist.

It could also be used in games and musical apps, which are limited at the moment due to the fact the only way to assess how vigorously a note has been played on the iPhone is through the accelerometer, which can record the movement of the iPhone, thus giving an approximation of how hard it has been struck.

The super mobes are expected to come in two models with screens of 4.7 and 5.5 inches - Apple's largest yet.

Interestingly, Samsung has licensed a similar technology from a British firm called Peratech.

A spokesman for Peratech, which is based in North Yorkshire, said he was not aware of any link-up with Apple. "Peratech get enquiries from all over the world," he said. "Sometimes they talk about it, whereas other times there are complete NDAs preventing discussion."

He said no news of an agreement with Apple had "percolated down" from the firm's top brass.

Apple is building a factory in Arizona which will be dedicated to producing synthetic sapphire screens for iDevices. ®