Is computer biz Viglen about to GET FIRED? Lord Sugar's firm in rumoured sell-off 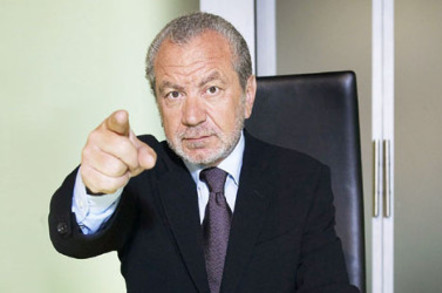 Lord Sugar is close to selling education tech supplier Viglen to Westcoast Holdings, folk in Blighty's system builder community are telling us – a claim that has been flatly denied by the named buyer.

The word on the street is that Hertfordshire-based Viglen has been in talks with the group, which also houses distributor Westcoast Ltd and – more pertinently – government-focused reseller XMA.

The nuts and bolts of the deal have been thrashed out, claimed one source, saying: "it is effectively a done deal," adding that both firms were "dotting the Is and crossing the Ts".

We are told staff at Viglen, which was established in 1975, became aware of sales rumours during the summer when it is understood that at least one system builder took a look.

Hirsute walnut Sugar's company Amstrad acquired Viglen in 1994 but Sugar stepped down as chairman in 2009. Claude Littner, one of Sugar's generals on Beeb show The Apprentice was brought in as director to boost results.

Viglen sells its own brand of desktops, servers, storage to all levels of education, healthcare, emergency services and corporate punters. It has also developed education specific software and services.

As for Westcoast Holdings boss Joe Hemani, the deal would bolster the education and public sector focused operations of XMA, headquartered in Nottingham.