Boffins build R2-WEE-2: The urine-powered robot with a human-like heart 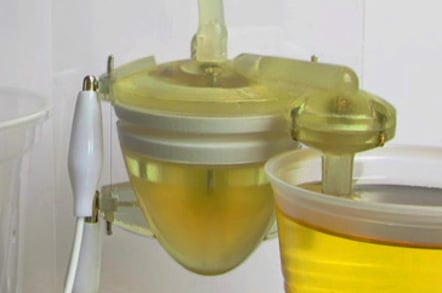 Scientists have taken one step closer to creating a truly autonomous waste-driven robot by building an artificial heart capable of pumping urine into the machine's bacterially-driven "engine room".

Researchers at the Bristol Robotics Laboratory – a hook-up between the University of the West of England and University of Bristol – have spent ten years working on the beast.

EcoBot III (see below) - designed by the lab's Ioannis Ieropoulos and colleagues - currently dines on dead flies, as did EcoBot II. 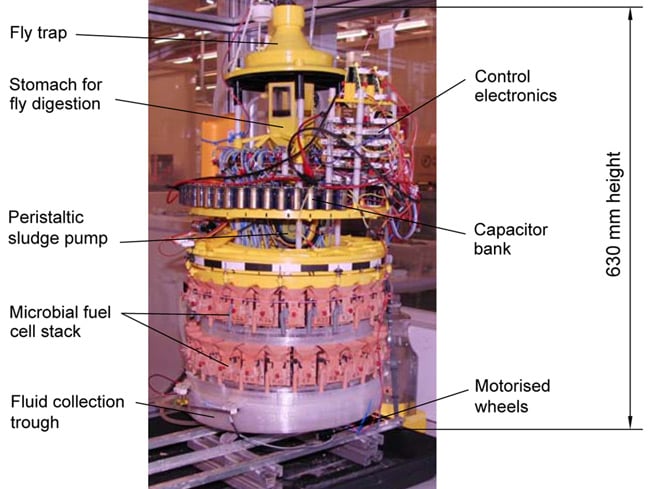 It's a nice idea, but there are practical problems attached to attracting and trapping insect nourishment.

The solution, and in turn the key to self-sufficiency, may be a device (pictured below) which works in a similar fashion to the human heart, using “artificial muscles” fashioned from shape metal alloys. 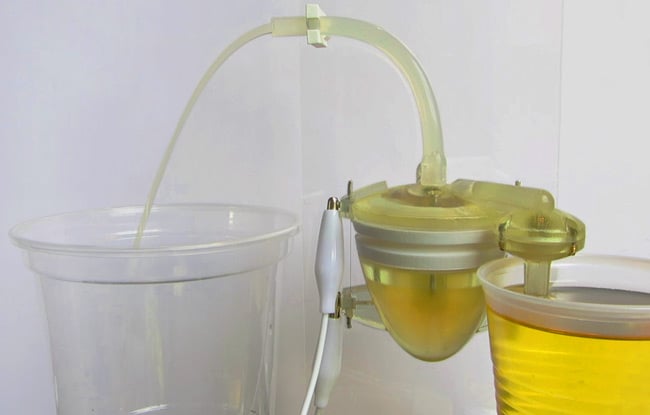 The team explains: "When heated with an electric current, the artificial muscles compressed a soft region in the centre of the heart-pump, causing the fluid to be ejected through an outlet and pumped to a height that would be sufficient to deliver fluid to an EcoBot’s fuel cells.

"The artificial muscles are then cooled and returned to their original shape when the electric current was removed, causing the heart-pump to relax and prompting fluid from a reservoir to be drawn in for the next cycle."

Peter Walters, lead author of the study, which appears in today's Bioinspiration and Biomimetics, said: “The artificial heartbeat is mechanically simpler than a conventional electric motor-driven pump by virtue of the fact that it employs artificial muscle fibres to create the pumping action, rather than an electric motor, which is by comparison a more complex mechanical assembly."

Walters stressed to El Reg that while the heart is functioning, it's matter of future development to actually get it built into the next generation EcoBot.

The scientists reckon EcoBots might in the future "perform environmental monitoring tasks such as measuring temperature, humidity and air quality", or act en masse as a "mobile, distributed sensor network".

They suggest: "In the city environment, they could recharge using urine from urinals in public lavatories. In rural environments, liquid waste effluent could be collected from farms."

Naturally, our vision for the future is Terminator-style urine-powered killbots menacing humanity, or at best generally making a complete nuisance of themselves hanging around toilets begging for a drink.

Regarding these chilling scenarios, Walters concluded: "It is hard to predict and control the long-term application of any new technology, and this is particularly difficult in a fast-moving field like robotics. We hope that future waste-powered robots would be used for humane (eg environmental monitoring) and not harmful purposes." ®

After publication, Dr Ioannis Ieropoulos from the BRL got in touch to clarify: "The EcoBot line of work developed at BRL has always had the benevolent waste utilisation in mind, and so when these self-sustainable robots are being developed, the main target application is remote area access, where it would be lethal, impossible or undesirable for humans to go. This has been at the core of the research and any association with the science-fiction imaginative robots [to which] you refer would be inaccurate."

Cartidges still some years out from commerical release, but for the cost of a coffee...

Buddy, can you spare a time?