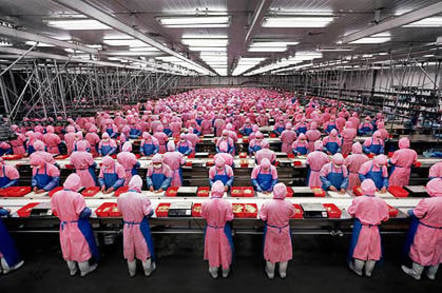 Global manufacturing giant Flextronics International, which supplies components for Apple, Cisco, HP, Lenovo, and Microsoft, among others, has been accused of virtually imprisoning workers in indentured servitude.

Bloomberg Businessweek reported on Thursday the sad saga of one Nepalese chap, Bibek Dhong, who left his home in a village on the edge of the Kathmandu Valley to take a job in a Flextronics manufacturing facility – a job that required him to go into debt to pay $1,000 to three recruiters.

Dhong was caught up in what Bloomberg Businessweek describes as "a frenzy" of recruitment of workers to assemble cameras for Apple's iPhone 5 at Flextronics' Bukit Raja plant near Kuala Lumpur, Malaysia. He paid $250 of his own money to the first recruiter, borrowed $350 to pay the next recruiter in the human supply chain, and signed a debenture agreement for $400 to satisfy the third.

Apple's Supplier Code of Conduct [PDF] notes, "Where workers are required to pay a fee in connection with obtaining employment, Suppliers shall be responsible for payment of all fees and expenses in excess of the amount of one month of the worker's anticipated net wages."

Dhong's 12-hour-per-day job at Flextronics paid $178 per month – the minimum monthly salary that the government of Nepal requires for its citizens working in Malaysia.

He told Bloomberg Businessweek that each of the brokers told him never to mention the fees, saying that "if any worker reveals it to anyone, he will be sent back to Nepal immediately, and he will be charged and punished."

The exorbitant secret fees, however, turned out to be the least of Dhong's troubles.

After his passport was allegedly confiscated and held by Flextronics, he began work testing iPhone 5 cameras, which had been assembled by others. Those other workers apparently did a crap job, with seven out of 10 of the camera's failing to pass Apple's standards. The production line was shut down in three months.

The hapless Dhong and his coworkers returned to their company-supplied living quarters to await further word, but they heard nothing from Flextronics for 20 days. On January 10, they were rounded up into the compound's courtyard, where they were told – by a man with a bullhorn, no less – that their jobs had been eliminated because of the "current economic environment," and that they would be sent home.

Dhong and his fellows were paid $600 – which Flextronics told Bloomberg Businessweek was more than Malaysian law required – and most of the men wired the bulk of it back to their families.

Then his situation got even worse. Although about 200 of his Nepalese fellows were sent home, Dhong was not one of the lucky ones. The remaining workers, over 1,300 of them, were instructed to remain in their living quarters, and Flextronics retained their passports. There they waited for further word. And waited. And waited.

Then they began to run out of food – and having sent most of their money home, they had no cash left to buy more. By early February, the situation became desperate. As one of Dhong's coworkers told Bloomberg Businessweek, "We were scared. We thought, if we die here, we will die together." Another claimed, "They treated us like dogs."

A riot ensued. Windows were smashed and televisions were hurled from the residence's high-rise windows. The outburst, however, turned out to be just what the trapped men needed: when police arrived, instead of arresting the rioters, they ordered Flextronics to feed them – although the meals they supplied were skimpy and often spoiled.

Eventually the repatriation flights resumed. Dhong said he got his passport back on the way to the airport on February 21 – it had been more than two months since he had last worked – and he flew back to Nepal, where he's now working in a shoe factory, earning less than $90 per month, still in debt, and paying $300 per year in interest charges.

On its website, Flextronics – which employs 200,000 people worldwide – describes itself as "socially responsible," and says it "empowers our people to achieve their dreams and aspirations." One doubts Dhong's dreams included crushing debt.

When contacted by Bloomberg Businessweek, a Flextronics spokeswoman said, "As with previous practice, we will immediately reimburse any employees that have been charged excessive fees by labor agencies." An Apple spokesman said that Cupertino will make sure "the right payments have been made" when Flextronics finishes its investigation into the Bukit Raja fiasco.

To be fair, Apple has done groundbreaking work in attempting to ensure that its supply chain treats workers with a modicum of decency, and has severed contracts with non-complying suppliers, as detailed in its Apple Supplier Responsibility 2013 Progress Report [PDF].

As the Flextronics experience shows, however, much remains to be done. The next time you snap a photo with your iPhone – or, for that matter, plug something into your Cisco router, boot up your HP or Lenovo laptop, or frag a baddie in Call of Duty on your Microsoft Xbox – think of Bibek Dhong. ®