It's the Inter-THREAT of THINGS: Lightbulb ARMY could turn on HUMANITY

CTO calmly illuminates us on the world's biggest potential botnet 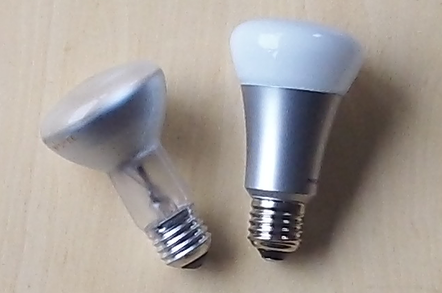 Fujitsu Forum Fujitsu’s CTO has sketched a nightmare vision of lightbulbs turning on their human masters in massive denial of service attacks if industry doesn’t get a grip on the security of the “internet of things”.

And even if they don’t get that incandescent, the much vaunted internet-connected lightbulb leaves users open to having their homes messed with and broken into by hackers, warned Dr Joseph Reger.

In a “what’s on the CTO’s mind” session at the Fujitsu Forum in Munich, Reger used the lightbulb example to illuminate some of the darker potential of the net-o'-tings. By having a gateway and an IP address, users could use their phones or other devices to switch their lights on and off, change the “mood” or simply goof around.

More seriously, they could interrogate the bulbs in their home to check their condition and predict failures. Or, more likely, when they are in Robert Dyas or Home Depot they can ask the bulbs back home what type they are so that they can purchase the correct spares.

At the same time, he warned, it was entirely feasible that miscreants could hack into your home illumination system to check usage. This could easily tip them off to when you’re likely to be home, or even whether you’re on holiday – and thus choose the optimum time to break in.

However, as bulbs - and other devices - gain more “intelligence”, far more serious possibilities arise. “There will be some that are more intelligent,” predicted Reger, and therefore could be injected with malicious code and used to mount DDoS attacks, for example.

“You suddenly have an army of attackers…billions of soldiers. And that’s new,” he said.

If the prospect of being attacked by lightbulbs and other lightweight devices doesn’t worry you, consider, as Reger has, that there are around 40 million servers on the planet right now. With one bulb for every person on the planet - a conservative estimate - hacking the Internet of Things could potentially give you an army of 8 billion, just from lights alone. Industry vendors confidently throw around predictions of 40 billion devices joining the IoT. Thus, without basic security measures, we are potentially creating the most fearsome botnet in history - or at least the potential for some seriously irritating Halloween pranks.

If there was anything reassuring in Reger’s vision, it was his contention that as bulbs and other sensor-type devices will become so much a part of life that we can drop the “of things” suffix and just get back to referring to the internet.

Which may be some comfort as you sit nervously in the dark having suffered yet another attack because your mood lighting system has turned, well, just plain moody. ®