'Expect us' ... in pretty much every country it seems 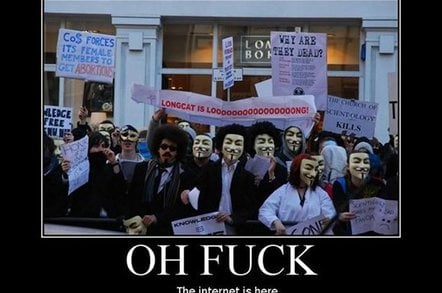 Government websites were defaced in the Philippines by hackers who claim affiliation with Anonymous amid a protest against alleged corruption.

The vandals hijacked sites on Sunday with a message that attempted to rally support for a demonstration against lawmakers' alleged misuse of public money, and demanded the abolition of so-called "pork-barrel funds". Both federal and local government agencies were hit by the online attack, which involved replacing the content of websites with political graffiti.

The state postal agency, the Insurance Commission, an anti-piracy agency (always a popular type of target when Anons are on the loose), and the Sugar Regulatory Administration were among those redecorated. The Philippine embassy's website in Seoul, South Korea, was also compromised, Reuters reports.

"We apologise for this inconvenience, but this is the easiest way we could convey our message to you, our dear brothers and sisters who are tired of this cruelty and this false democracy, tired of this government and the politicians who only think about themselves," the hacktivists' politely worded message stated.

Amid the row over the alleged misuse of public cash, Philippines President Benigno Aquino has insisted that he is cracking down on corruption. Meanwhile, the brouhaha has made it difficult for the top politician to push forward his planned economic reforms.

The Philippine Daily Inquirer offers further context, here; the controversy has been rumbling on for 14 months, during which government websites have come under waves of attack by defacers.

The latest 'net assault in the Philippines comes a week after the website of Singapore's main paper The Straits Times was hacked by someone also claiming to be a part of the infamous Anonymous hackivist collective.

Jason Hart, veep for cloud solutions at SafeNet and a computer security expert, argued the recent run of attacks in southeast Asia ought to serve as a wake-up call to organizations all over the world.

"The Straits Times and the Philippine government websites are the latest casualties in a long list of organisations who have fallen victim to a website defacement," according to Hart. "While no data was taken on this occasion, with hacking attempts becoming almost a daily occurrence, it’s clear that being breached is not a question of 'if' but 'when'. Therefore, companies need to ensure they are taking the necessary precautions. This means using best practice data protection to guarantee that data is effectively useless when it falls into unauthorized hands.

"Too many security departments hold on to the past when it comes to strategy, focusing on breach prevention rather than securing the data that they are trying so hard to protect.

"If a cyber-criminal wants to hack the system or steal data, then they will find one way or another to do so. Thus companies need to focus on what matters most – the data - by utilizing technologies such as encryption that render any data useless to an unauthorized party." ®

To mark the Fifth of November - Guy Fawkes' Day in England - Anonymous is promoting street protests in the US, Philippines and many locations elsewhere under the rallying hashtag ‬MillionMaskMarch.